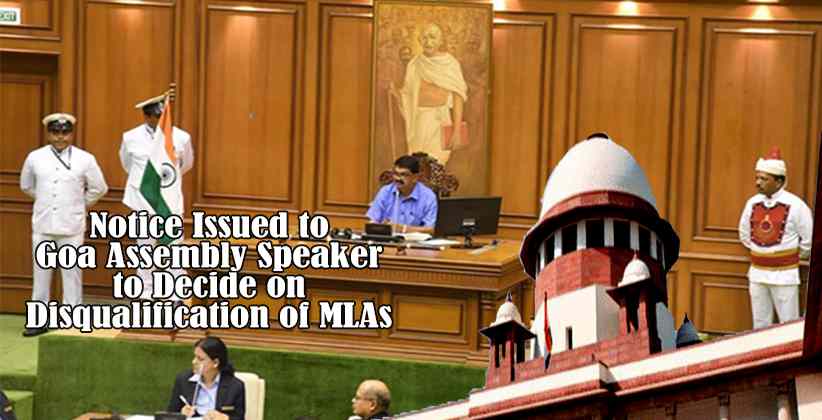 The Apex Court on June 16, 2020, issued a notice to the Goa Assembly Speaker on a plea by state Congress president Girish Chodankar requesting directions to decide upon the disqualification of 10 party MLAs who joined the BJP.

These legislators had defected to BJP in July 2019 and the plea for disqualification against them was pending since August 2019.

The petition filed against the speaker of the Legislative Assembly of Goa that has abandoned his jurisdiction and duty to decide the disqualification petition. He pleads that in Keisham Meghachandra Singh v. Hon'ble Speaker Manipur Legislative Assembly and ors, the Supreme Court held that Speaker is required to decide the petition of disqualification within a reasonable period of time and if there are no exceptional circumstances then within the period of 3 months.

He also pleaded that the aforesaid timeline as prescribed in law has been breached by the speaker. This is a flagrant violation of the principle of natural justice and rule of law as traceable to Article 14 of the Constitution of India as a result of which, the supreme court issued a notice on a plea by Maharashtrawadi Gowantak Party (MGP) leader seeking direction to Goa assembly speaker to decide on disqualification.

A bench of Chief Justice S A Bobde and Justices M R Shah and A S Bopanna sought a response from the Speaker on a writ petition filed by Goa Pradesh Congress Committee chief. Senior advocate Kapil Sibal, representing the petitioner, sought an early date of hearing in the matter. The petitioner has relied upon the SC's recent ruling, in a separate case, that had held the Speaker should decide such disqualification plea within a maximum period of three months.

On July 16, the Supreme court issued an early notice, seeking a reply from Speaker Rajesh Patnekar within a period of three weeks. Out of 15 Congress MLA, ten have formed a separate group and merged it with BJP, taking the tally of the ruling party in 40-member Assembly to 27. Some of the defectors were rewarded with a ministerial berth in the Pramod Sawant-led government.