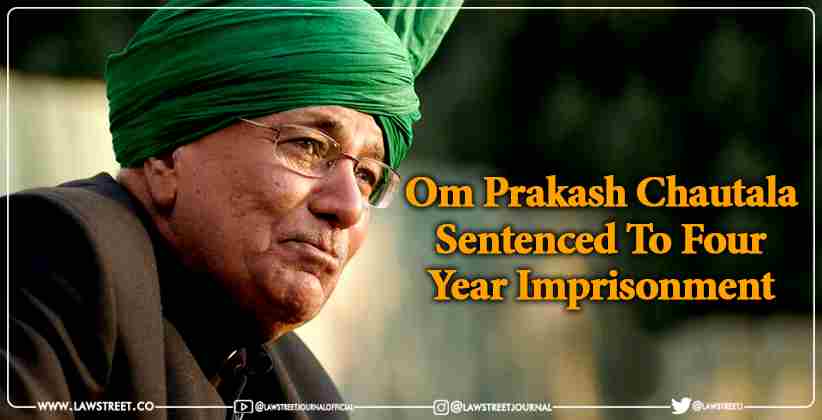 The Rouse Avenue Court awarded a four-year imprisonment, Rs 50 lakh fine, as well as attached four properties located in Hailey Road, Panchkula, Gurugram, and Asola. In addition to this, the Judge also ordered Chautala to give Rs five lakh separately to the Central Bureau of Investigation (CBI) and warned the INLD chairman that if he failed to pay the sum to the CBI, he would serve for six months of additional imprisonment.

The Court ordered Om Prakash Chautala to be taken into custody from the courtroom itself. Chautala asked for ten days to file an appeal in this case, and the judge suggested that he go to the High Court. After hearing both the prosecution and the defence, Chautala was convicted by the Rouse Avenue Court in New Delhi.

Citing his old age and health, Chautala has asked for a little leniency. He had also requested the court to consider the term he had previously served in the JBT Teachers Recruitment Scam as well as the fact that he had completed his class 10th and class 12th schooling in Tihar Jail.

The CBI has been requesting that the court decide on the quantum of punishment for the crime committed and not be lenient in its decision.

Further, the prosecution said that easing the punishment would send the wrong message and that the strictest possible punishment should be awarded to the convict.

Chautala reached the court in a wheelchair due to old age. Advocate Harsh Kumar Sharma represented him and apprised the  court that Chautala has become 90% disabled physically and has been suffering from a lung ailment. Adv. Harsh Sharma apprised the court that the leader cannot move much and needs an attendant to even move around. The Advocate also said that a lenient view should be considered. The Court has directed Chautala to submit his physical-disability certificate.

On March 26, 2010, they filed a charge sheet against Chautala according to the CBI, which was probing this matter. The agency stated that between 1993 and 2006, the seven-time MLA had collected assets worth over ₹ 6.09 crore and more as his known source of income. By calling it a "Political Vendetta", the Chautala family continues to slam the case.