Home Judiciary No person can claim open access to the Parliament as a right: Delhi HC [READ ORDER]
Judiciary 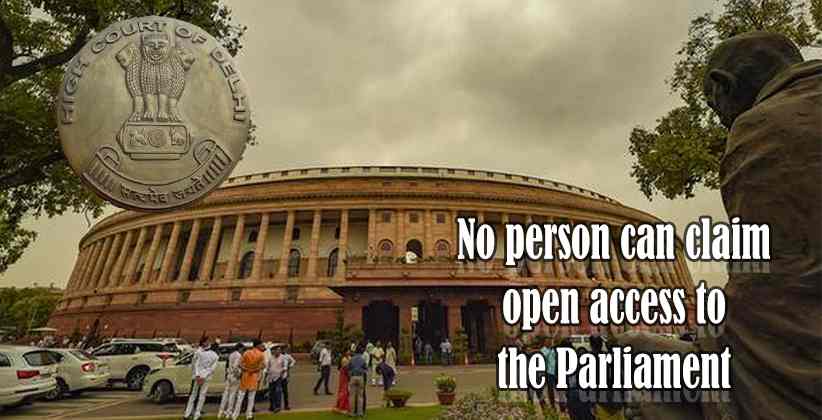 In the matter of Anil Chamadia v. The Chairman Media Advisory Committee Rajya Sabha and Ors., while delivering the judgment on May 20, 2020, the Delhi HC has held that no person, be a journalist or otherwise, can claim open access to the precinct of the Parliament. Judgment to this effect was delivered by a single judge bench of Justice Navin Chawla.

The petitioner of the present case is a freelance journalist. He had by way of the writ petition challenged the decision of the Media Advisory Committee of the Rajya Sabha MAC) taken in the meeting held on 06.07.2017 restricting the issuance of passes to the journalist under the freelance category to only sessional passes thereby discontinuing its earlier practice of issuing an annual pass to the journalist under the freelance category and further prayed for a Writ of Mandamus directing the respondents to issue a permanent pass to him for covering the proceedings of the Rajya Sabha.

He had challenged the decision of MAC as not only violative of the Fundamental Right guaranteed under Article 19(1)(a) of the Constitution of India but also under Article 14 in as much as it fails to give any reasonable basis for treating the freelance journalist as a separate category from the accredited journalist for issuance of the Rajya Sabha Press Gallery Pass. He had also alleged that the Impugned Decision seeks to create a divide and treat freelance journalists unequally and as being inferior to those journalists who are affiliated to media houses or news agencies.

Rejecting the contentions of the petitioner, the Court held that,

“no person, be a journalist or otherwise, can claim open access to the precinct of the Parliament. No person has an unfettered right to enter the same. In fact, even in the United Kingdom and the United States of America, rules have been framed governing the entry of journalists into the House of Commons and the United States Congress. We must also keep in view the ghastly attack perpetrated by the terrorists on the Indian Parliament on 13th December 2001.”

The Court also held that:

The ‘Rules/Regulations for Admission to Rajya Sabha Press Gallery/Central Hall’ makes a distinction between newspapers on the basis of their circulation, news agencies, non-wire news-agency, and feature service, for purpose of weekly, fortnightly and monthly passes. It also provides for the issuance of Temporary Press Gallery Card to a freelance journalist. Without going into the number of passes and the nature of passes issued to these categories, the distinction made between various categories on the basis of circulation or the nature of agency et cetera, cannot be said to be arbitrary.”

But the Court also directed to the respondent asking them to revisit its Rules and Guidelines for issuance of passes keeping in view the mandate of Article 19(1)(a) of the Constitution of India.

Senior Advocate Salman Khurshid had appeared for the petitioner in the said matter.