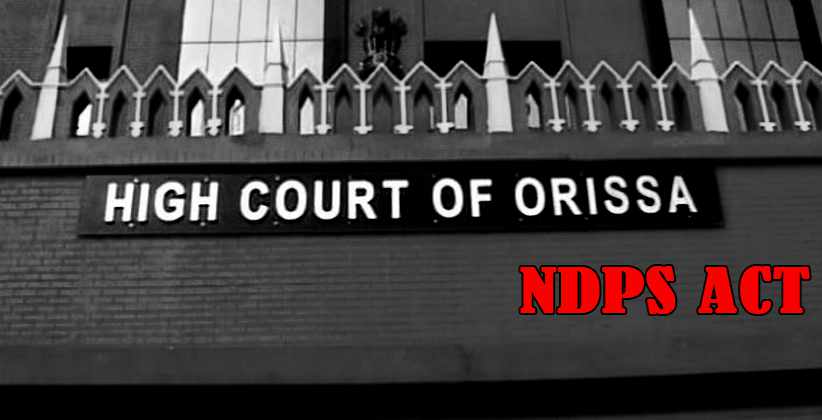 The Orissa High Court in a landmark decision has stressed upon the filing of charge sheet against the accused held under the Narcotic Drugs and Psychotropic Substances (NDPS) Act, 1985 within stipulated 180 days. The accused were arrested under the NDPS Act for trading dreaded narcotics.

Justice S. K. Panigrahi observed this while hearing a bail plea in connection to a FIR lodged by Jaypore police after it seized 270 kg 200 grams of Ganja from a truck. Police had caught transporters red-handed. The accused persons were produced before the Sessions Judge-cum-Special Judge Koraput at Jaypore and they were sent to judicial custody on 15.04.2019. Moreover, an application for an extension of 60-days’ time to submit the charge sheet was sought by the prosecution to further investigate the ownership of the seized vehicle from the RTO. The same was granted after the lapse of the statutory period of 180 days i.e. after the stipulated period on 12.10.2019.

The High Court also observed that the special session court judge heard the submissions of the Special Public Prosecutor and proceeded ex- parte to extend the time to 30 days w.e.f. 13.10.2019 for submission of charge sheet without even issuing notice to the Accused persons as envisaged under Section 36A (4) of the NDPS Act. In this backdrop, one of the accused named Iswar Tiwari filed a bail petition before the Orissa High Court.

"The most poignant aspect of the case, however, is the non-issuance of notice to the accused at the stage of hearing the application for extension of time", said the single-judge bench of the High Court. Consequently, Justice Panigrahi held the non-service of a notice on the accused in violation of the most fundamental principle of natural justice i.e. Audi Alteram Partem which creates an indefeasible right to be released on bail to the Petitioner and allowed the bail petition. It has also suggested the lower court that it may alter the bail bond accordingly.

While appreciating the provisions empowering the Courts to authorize detention beyond 180 days as stipulated in the Act, for a period up to one year in the event of the pending investigation, the Single Bench Judge noted that that the law, however, mandates that the provisions shall be subject to certain conditions as following:

"In case there is a violation of any of the above, an indefeasible right to bail will be accrued to the accused", held Justice Panigrahi.

Further on, the court passed a direction to issue a notice to the accused and ruled that the accused, in the hearing of any such application for extension of time, must be produced in court.