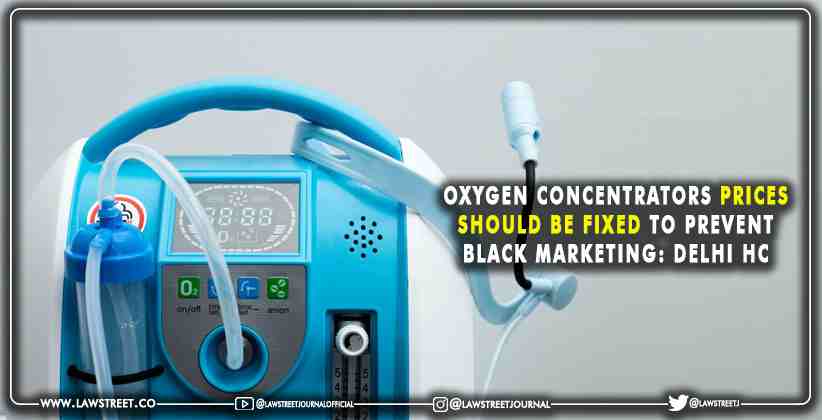 On Wednesday (12 May 2021), the Delhi High Court told the Center it was "high time" that the Maximum Retail Price of oxygen concentrators and other equipment in use for COVID treatment should be fixed to stop their hoarding and black marketing.

The High Court made the observation while giving a contempt notice to  people named in the cases recorded after May 2 regarding hoarding and black marketing of medicines and equipment needed for treating COVID-19.

A Bench of Justices Vipin Sanghi and Rekha Palli said the notice would be served to all accused through the police headquarters where the cases have been enlisted. It also stated the notification would likewise go to those people whose names were included in the 40 odd cases throughout the investigation.

Further, the conversation on the cost of the oxygen concentrators started after advocate Sanjeev Sagar, counsel for one of the applicants, Manish Chauhan, said public prosecutors and legal officials were unaware of the May 2 order of the bench.

Chauhan, a resident of Delhi, was looking for court's directions to the government to announce medical and clinical equipment used for Covid treatment as essential things under the Essential Commodities Act.

Sagar told the court that a trial court has said that offenses can't be "made up" against such people and the alternative was to book them for contempt of court in case they are selling medications or equipment at higher rates.

The bench was shown media reports which states that the concerned trial court, while hearing the anticipatory bail documented by Navneet Kalra, regarding the capture of oxygen concentrators from his cafés, said that initial a law must be made to direct costs, and individuals can't be punished in a rush only because the high court wanted steps to be taken.

Amicus curiae and senior advocate Rajshekhar Rao stated that the trial court can't be blamed since a value cap has not yet been fixed for a greater part of the imported equipment, and the central government needs to notify the high court what steps it has taken.

Central government standing counsel Amit Mahajan told the court the matter was under consideration, and sough time to notify the seat about the decision taken. He assured me that a decision will be taken soon.

The court requested that Sagar set up a note on fixing costs, for notifying public examiners and legal officials in the subordinate courts, and stated it will be circulated by the Delhi government.

The court was hearing a request by a lawyer- petitioner solicitor Rakesh Malhotra, who, along with a few medical clinics, sought directions to the Center and the Delhi government for better facilities and constant supply of oxygen in clinics and nursing homes.

The notification to those named in the FIR was given as per a May 2 request for the seat in which it cautioned of contempt action against all those engaged hoardings of clinical equipment or medicines or selling them at costs above MRP.