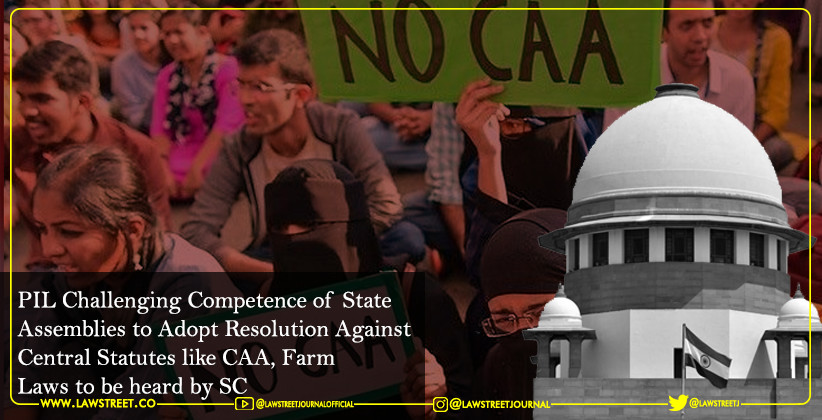 Judiciary Mar 13, 2021 Tanya Sehrawat ( Editor: Ekta Joshi ) 2 Shares
2 Shares
A plea is due to be heard by the Supreme Court on Friday (March 12, 2021) which challenges the legislative competence of State Assemblies in adopting resolutions against the central statutes such as Farm Laws and CAA. These fall under the seventh schedule of the Union list.

The PIL has been filed by Samta Andolan Samiti raising questions on the legislative actions of four different State Assemblies, namely that of Kerala, West Bengal, Rajasthan and Punjab. It claims that these assemblies have infringed the Fundamental Rights of Indian citizens. The matter will be heard by a Bench comprising CJI SA Bobde and Justice Bopanna.

The petition has specifically raised a question of law, whether under Articles 213(2)(a) and 246(1) any state assembly endowed with the power to pass resolutions which criticise a Central statute that falls within the List I of the Seventh Schedule.

It was further stated in the petition that the four State Assemblies chose to condemn the Citizenship (Amendment) Act, 2019 even after it was passed by both the houses of Parliament and received the assent of the President. The same was duly notified in the Gazette of India. The act was supposed to come into force on December 12, 2019. However, there were about sixty petitions challenging its constitutional validity and the adjudication was pending before the Supreme Court. The notices were issued pertaining to the same.  In furtherance of this, the Legislative Assembly of West Bengal has chosen to criticise the three recently passed Farm laws and adopted a resolution against the same which owe their emanation to List I. These have also been challenged before the Supreme Court through writ petitions.

It is said by the Petitioner that along with imposing preconditions on the speakers to decide the admissibility of resolutions before allowing the same to be placed in assembly, Article 208 which has the Rules of Procedure also lays down the subjects which are not the concern of the state government. Some litigations are also pending on the same.

The petitioners claim that the resolutions which have been passed by these State Assemblies are unsustainable in law along with being arbitrary. These resolutions tend to target a Central Legislation having an effect upon entry 17 of the Union list along with breaching the constitutional bar as under Article 246(1). The plea also states that the Legislators who have contributed to the passing of these resolutions have violated their ‘oath of office’ which was administered by them while being members of the respective Legislative Assemblies.  Under Article 213(2)(a), when an Ordinance is brought, but before the expiration of six weeks from the reassembly of the legislature, the members of the Legislative Assembly want to disapprove the contents of the Ordinance and the said disapproval is agreed to by the members of Legislative Council, the same is liable to be done by way of passing a Resolution by the Legislators to that effect. However, as per the matter in question, the same falls beyond the scope of this article.  Along with this, the petition further discusses Article 194 which pertains to the powers, privileges and Immunities of the State Legislature.

However, Re, it was held that Freedom of Speech of the Legislator is independent of that guaranteed under Article 19(1)(a). This is further protected from any action in the court of law. On this point, the Petitioner lay down its opinion by saying that such immunity encourages the State Assemblies to pass resolutions like the impugned ones. It further argued how even after violating provisions under Article 191, the Governor cannot take any disciplinary action under Article 192 even when there is clear overreach that offends Article 246 along with the Seventh Schedule of the Union List.

The Speakers of the State Assemblies did not pay attention to the fact that they did not have the jurisdiction to pass the impugned resolutions and more so when various writ petitions regarding the same were already pending before the Supreme Court.  Lastly, the case of Raja Ram Pal v Hon’ble Speaker, Lok Sabha, (2007) was cited in the plea. In this case it was inter alia held the actions of the speaker are open to judicial review in the floor of legislation. Another case, namely, State of West Bengal v. C.P.D.R. (2010) was cited in which it was held by the Constitution Bench of the Supreme Court that Judicial Review is significant to resolve the disputes regarding the limits of constitutional powers and constitutional limitations as an ultimate interpreter of the Constitution.