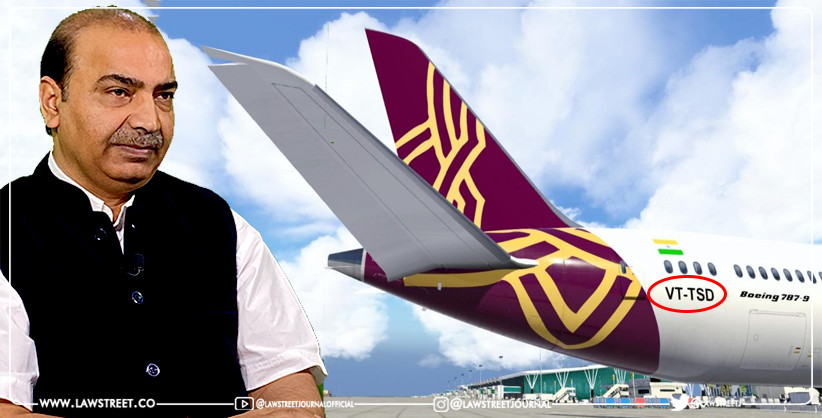 A Public Interest Litigation (PIL) has been filed in the Delhi High Court by Advocate and BJP leader Ashwini Kumar Upadhyay seeking writ, order or direction to Centre to change Call Sign VT written on Indian Aircrafts which stands for Victorian Territory and Viceroy Territory, (a legacy of British Raj) in order to secure Sovereignty, Rule of Law (Article 14), Right to Freedom (Article 19) and Right to Dignity (Article 21).

The prefix 'VT' stands for 'Victorian Territory and Viceroy Territory', which is the nationality code that each aircraft registered in India is required to carry. The Code is generally seen just before the rear exit door and above the windows. All the domestic airlines have the prefix, which is followed by unique alphabets that define the aircraft and who it belongs to. For example, on Indigo flights the registration VT is followed by IDV, i.e., VT-IDV, for Jet, it is VT-JMV.

The Ministries ofHome Affairs, Finance, Foreign Affairs, Civil Aviation as well as Law & Justice have been made respondents in the said petition.

● The registration number of Indian aircraft marks the legacy of 'British Raj'. 'VT' code is a reflection of colonial rule. India is a sovereign country hence cannot be a territory of the Viceroy. Why is India continuing with VT code? The efforts of the government to change the registration code have been fruitless. In 2004, the aviation ministry approached the International Civil Aviation Organization (ICAO) to change the code but no decision has been taken so far. It is a code given to us in 1929 by British rulers, denoting us as British territory. It's very unfortunate that India, even after 75 years of Independence, retains VT, the symbol of slavery.

● The display of call signs is a must according to international laws governed by the UN, which specifies that every aircraft of every nation must specify the name of the country to which it belongs, using a Unique Alpha-Numeric Code'. The code containing five characters should have two alphabets, that is the country's code ('VT' in India's case) and the rest shows which company owns the aircraft.

● The call sign 'VT' was assigned to India during the International Radiotelegraph Convention of Washington signed at Washington on 27.11.1927. Like India, every country has a one-or two-character alphanumeric code for the identity of aircraft. Like the US has 'N', UK has 'G', UAE has 'A6', Singapore has '9V' and so on. According to the World Factbook placed in the website of cia.gov, these codes indicate the nationality of civilian aircraft.

The prefix codes are based upon radio call-signs allocated by ITU to each country. Since 1947, the International Civil Aviation Organization (ICAO) has been managing code standards and their allocation. Earlier, colonies under British rule had aircraft codes starting with V as the British government had set that. However, later many countries such as Sri Lanka (4R) or even Nepal (9N).

● The words "Sovereignty and integrity of India" were inserted in Article 19(2), (3) and (4) to denote the independence and wholeness of the country. It was also introduced in the oaths of "allegiance" to the Constitution prescribed in Schedule-3 indicating that the duty to uphold "sovereignty and integrity of India '' flowed from a recognition of the supremacy of the Constitution. (Indira Nehru Gandhi AIR 1975 SC 2299). The Apex Court reiterated the view that on the adoption of the Constitution, the erstwhile dominion of India and Indian States surrendered their sovereignty to the people of India who framed and adopted the Constitution. (Virendra Singh AIR 1954 SC 447). The Constitution moulded new sovereignty and gave shape to the aspirations of people, by destroying foreign control and evolving a completely democratic form of government as a republic. (Vora Fiddali Mithibarwala AIR 1964 SC 1043).

● Union Ministers, Parliamentarians, Ministers of the State Government and Members of Legislative Assemblies take constitutional oaths to uphold the sovereignty and integrity of India under third schedule of the Constitution and frequently fly through the aircrafts but they have not taken appropriate steps to change the Call Sign VT. Therefore, this Hon'ble Court is the last hope of citizens.

● Our forefathers, including Gandhi Ji, Neta Ji, Sarvarkar, Azad, Bhagat Singh, Sukhdev, Rajguru devoted their life for complete independence, not hypothetical independence. The Constitution also directs the Centre to establish a sovereign socialist secular democratic republic. But, even after 75 years of Independence, VT, which is a sign of slavery, still exists.

● It is the duty of the State to create a climate where members of the society belonging to different faiths, caste and creed live together and, therefore, the State has a duty to protect their life, liberty, dignity and worth of individuals which should not be jeopardized or endangered. If in any circumstance the state is not able to do so, then the Court can't be a mute Spectator. Petitioner is before Court because the VT issue was raised in Parliament but it continues.

Keeping in view the above stated facts and circumstance, Court may be pleased to issue appropriate writ, order or direction to Centre to: