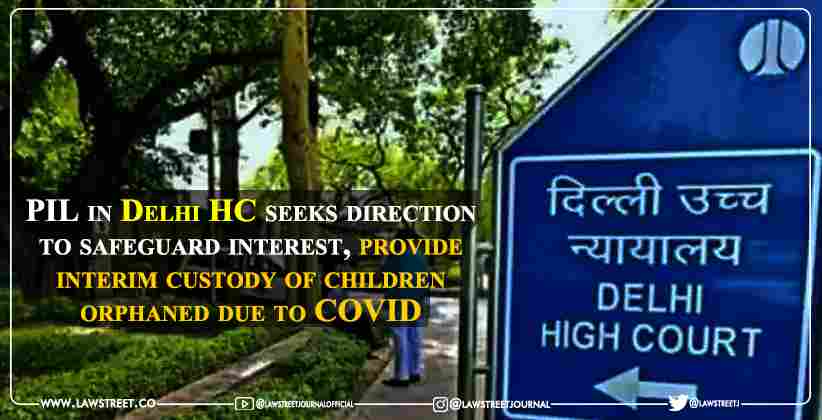 The Delhi High Court on Monday, May 10, 2021  issued a notice to the Union of India, the Government of the National Capital Territory (NCT) of Delhi, the Delhi Police, and other government authorities on a Public Interest Litigation (PIL) seeking direction to provide provisional custody of children orphaned due to COVID-19 to their nearest relatives or child care facilities under their monitoring and to protect the identities of these children so that they are not vulnerable or under the risk of being trafficked.

The petition, moved by Jitender Gupta, practicing lawyer of Delhi, has impleaded Union Of India, Ministry Of Women & Child Development, Ministry Of Health & Family Welfare, Government Of NCT Of Delhi and Delhi Police as party respondents. A division bench comprising of Chief Justice D. N. Patel and Justice Jasmeet Singh directed that the plea be treated as representation and it be decided in accordance with the law, rules, regulations, and government policy applicable to the facts of the case.

Claiming that many children who have lost their parents during Covid-19 are also facing a risk of being trafficked, the plea prays,

" Interim custody of such children be granted to their relatives or to child care homes while also exploring options for legal adoptions after duly scrutinizing all those who have expressed interest to adopt such children."

Additionally, the plea states that considering the urgency of the situation due to the complete collapse of health care infrastructure in national capital resulting in loss of hundreds of lives on a daily basis, the plea was being moved before the Delhi High Court to safeguard the security and the welfare of these children. The plea avers that the respondents have failed to perform their statutory duty towards the protection of life and personal liberty of general public and that no action was taken to safeguard the interest of the children who have lost their parents to Covid-19.

Apart from this, the Petitioner has also sought financial compensation for the family members of those citizens who have lost their lives after being denied access to adequate health care in terms of hospital admission, oxygen cylinders, injections, medications, etc.

Furthermore, the backdrop to the plea also includes direction to the Respondents to safeguard the interest of the children who have lost their parents to Covid-19 and who do not have anyone else to take care of them and face the risk of being trafficked. An Issuance of a writ of mandamus or any other appropriate writ order or direction to the Respondents to grant appropriate financial compensation to the family members of those citizens who have lost their lives during the Covid-19 pandemic after being denied access to adequate health care Infrastructure / Facilities in terms of hospital admission, oxygen cylinders, injections, medications, etc was also suggested.

In related news, dealing with a plea seeking direction to Union of India and Delhi Government to come up with a scheme to provide appropriate compensation to the families of the patients who died due to shortage of Oxygen, the Delhi High Court yesterday disposed of the plea by directing the Government to treat the plea as representation.