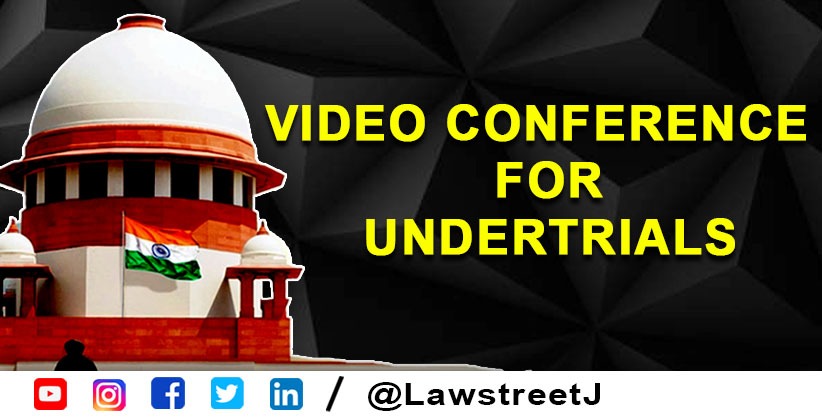 NEW DELHI: A PIL has been filed in the Supreme Court seeking a direction that presence of undertrials before the courts should not be ordered as a routine on each and every date, and video conferencing facility should be used for public safety as well as security of judicial officers.

The PIL filed by advocate Rishi Malhotra raised an issue of power of trial courts for ordering attendance of undertrial prisoners before it as a matter of routine practice without adhering to the statutory mandate as provided in the Code of Criminal Procedure, 1973.

The practice by trial courts to secure attendance of the undertrials on each and every date is nothing but wastage of court's time, money and more importantly, the safety of everyone including the judicial officers, it said.

A bench led by Chief Justice U U Lalit is likely to take up the PIL on October 11.

The plea contended that it cannot be disputed that an undertrial prisoner has a constitutional right to be present before the trial court when the trial against him is in progress. However, the said right is not an absolute right and is rather qualified by various provisions of the Code of Criminal Procedure.

“The fulcrum of the instant PIL is to prevent the various trial courts across India to not to insist on presence of undertrials on each and every date as a matter of routine practice thereby not only endangering the safety of public as well as judicial officers but also facilitating the opportunity of hardcore prisoners from escaping from the custody of the police," the plea said.

The plea cited the instance of the Delhi's Rohini Court firing on September 24, 2021, in which a dreaded gangster was shot dead when he was produced before the trial court for his usual appearance.

“Apart from this, there have been various instances all across the trial courts in India where during the normal usual course of appearances before the trial court by an undertrial, either the public safety has been put to danger or the said undertrial has fled from the custody of the police,” the plea added.

It referred to the Code of Criminal Procedure's Sections 205, 267, 268, 270, 273 and 317 which provided powers to the concerned court to dispense the personal presence of undertrial from jails during normal trial proceedings.

"What is happening across all over India before the trial courts is that as a matter of routine the undertrials are produced from the jails to the concerned courts on each and every dates which not only leads to unnecessary expenses on the state exchequer but also more importantly endangered the public safety and also the safety of the concerned undertrial especially in the cases of notorious gangsters and habitual criminals," it said.

The plea contended that even if the trial court deem fit in a particular case presence of an accused as an undertrial before it, it can avail video conferencing facility and especially in the cases of gangsters so that the public safety as well as the security of the judicial officers remained intact on one hand and the rights of an accused is balanced on the other hand.

(a) Whether an undertrial prisoner has a constitutional right to be present before the trial court when the trial against him is in progress or is the said right is not an absolute right and is rather qualified by various provisions of the Code of Criminal Procedure?

(b) Whether the courts have discretion to dispense the personal attendance of an undertrial accused unless and until the said attendance is required for the reasons to be written in writing?

(c) Whether in usual and normal circumstances, the presence of an undertrial accused is necessary when he is duly represented by his counsel?