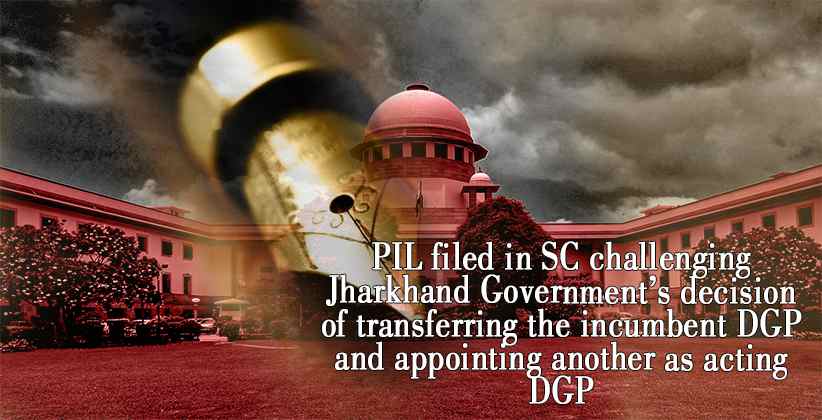 A PIL has been filed before the SC challenging the decision of the JMM-congress-RJD government in Jharkhand to transfer the DGP upon coming into power in December 2019 and appointing an acting DGP. The petition states that such transfer is in violation of the norms set by Prakash Singh’s ruling regarding fixed tenure and seniority of state police chiefs.

The petition was filed by the activist Prahlad Narayan Singh and narrates that on the superannuation of D.K Pandey, the then Director General of Police, the Government of Jharkhand initiated the process of appointment of new DGP as per the ruling in the case of Prakash Singh.

In the month of March-April 2019 a panel of eligible senior high ranking police officers who also had sufficient left-over service was referred to the UPSC as per the directives given by the top court and upon final recommendation and consideration of the judgment in Prakash Singh’s case, Kamal Singh Choubey, IPS was appointed as Director-General of police for the state of Jharkhand.

The plea was filed through advocate Sanchit Garga urges that after the assembly elections in December 2019 a new government of JMM led was formed and wanted to bring M.V. Rao an officer fourth in seniority but their favourite on the post of DGP.

It submitted that “There was no complaint against Mr. Choubey and he also did not represent the government for his transfer/ posting elsewhere, therefore there was no occasion for the State Government to disturb his posting also on account of the fact that he was appointed upon fulfillment of all the conditions and after competition of the procedure as ordained by this Hon’ble court.”

It is argued that for no reason Choubey has been transferred from the post of Director General of police to the post of Officer on Special Duty (OSD) to Police Modernization Division camp in New Delhi, even though he had served for the tenure of about nine months only.

The plea avers that “By way of the said notification dated 16.03.2020 Mr. M.V Rao, an IPS officer of 1987 batch has been surprisingly given additional charge of DGP for the State of Jharkhand who is already serving as Director General (Fire services & Home Guard), State of Jharkhand.”

As per the official website of Jharkhand Police in the civil list 2019 IPS, the present in-charge DGP Rao is in 4th position in seniority. So the procedure directed by the apex court was not followed. Thus his appointment on the post of DGP in the name of “In-charge DGP” is out and unlawful and in violation of principles laid down in the case of Prakash Singh. It is contended that “This act of the state of Jharkhand in contemptuous.”

The plea alleges that “Due to the aforesaid unlawful act of the state government the entire state of Jharkhand is suffering. As per the news reported by ANI NEWS dated 11.05.2020 (after the additional charge given to the present acting DGP, State of Jharkhand), the incidents of Naxal-linked arson and murder during March end to April this year have been higher than the last corresponding period.”

It is urged that removal of the earlier DGP, who was efficient was a “political and whimsical” move and a “good officer has been made a victim of some political vendetta.”

It is pointed out that appointment of the acting DGP is in violation of the top court’s order dated 03.07.2018 holding that “none of the states shall ever conceive of the idea of appointing any person on the post of DGP on acting basis”, for there is no concept of acting DGP as per the decision in Prakash Singh’s case.

It further possessed that the “high handedness of the State Government” has to be “nipped in the bud” before they succeed in their “unlawful motives” and “dictate appointments” of high-ranking officials as per their “whims and fancies.”

One of the directions issued by the SC in Prakash Singh’s case was that the DGP should be selected among the three senior-most officers of the Department, who have been impanelled for promotion, by the UPSC. The commission should also take into account length of service, good record, and range of experience for heading the police force. And once selected, he should have a minimum tenure of at least 2 years irrespective of his date of superannuation.