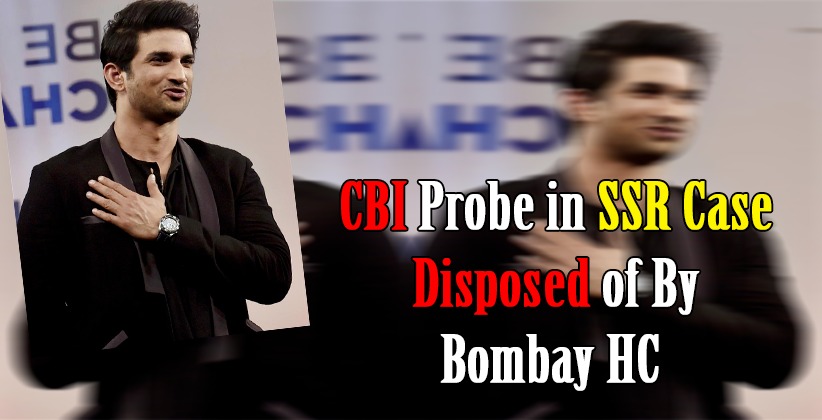 A bunch of Public Interest Litigations (PILs) were filed in Bombay High Court seeking various reliefs, including a CBI probe into the death of Bollywood actor Sushant Singh Rajput who was found dead in his apartment on 14th June 2020. On Friday (August 21,2020) a bench of Chief Justice Dipankar Datta and Justice Revati Mohite-Dere disposed them off by citing top court’s ruling and said that already Supreme Court had directed in its order dated 19-08-2020 the CBI to probe the matter, nothing remained for the High Court to decide.

One of the petitioners submitted that her PIL should be kept pending so that this Court could monitor the investigation to be conducted by the CBI.

Further, another petitioner’s counsel Subhash Jha urged that Advocate General should make a statement that the officers of the CBI shall not be put under quarantine once they arrive in Mumbai like the Bihar Police was forced to do so.

High Court dismissed the PIL in light of the same being beyond the scope and as far as petitioner’s counsel’s request was concerned, Court stated that they ought not to pass any order based on an apprehension.

The bench additionally stated that if the petitioners felt that the Maharashtra authorities, the Mumbai Police, or the Brihanmumbai Municipal Corporation (BMC) were not cooperating with the CBI, they may approach the Supreme Court.

“Let it happen first,” the bench stated. “Let the BMC face the music before the Supreme Court if there is any impediment for the CBI when it comes here.”

“The CBI is here on the orders of the Supreme Court,”