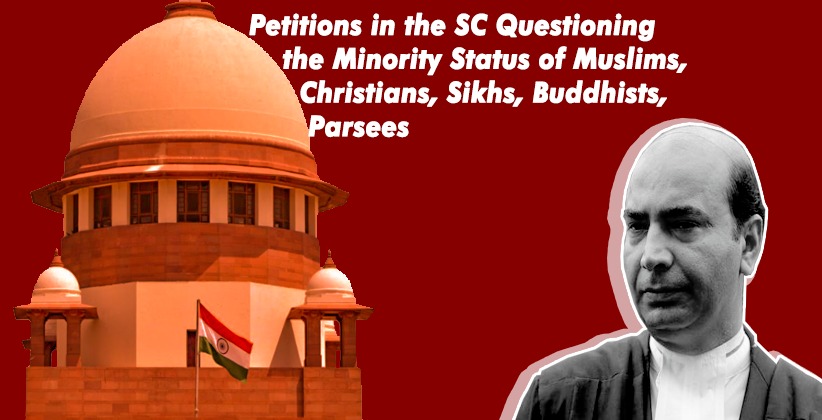 The petition, filed through advocate Ashwini Kumar Upadhyay, said in order to avoid multiplicity of litigations and conflicting views, the plea has been moved before the Supreme Court.

The plea said, “Denial of minority rights to real minorities and arbitrary and irrational disbursement of minority benefits to majority infringes upon the fundamental right to the prohibition of discrimination on the grounds of religion, race, caste, sex or place of birth.”

The petitioner claimed in his petition that Hindus, who, according to national data, are the majority caste, are a minority in many north-eastern states and in Jammu and Kashmir.

However, the Hindu community is deprived of the benefits available to minority groups in these States, the plea said, adding that the concept of minority in this context should be reconsidered by the National Commission for Minorities (NCM).

The plea has sought to declare section 2(c) of the NCM Act 1992 “void” and “inoperative” for being “arbitrary”, “unreasonable” and “offending“.

According to Article 29-30 of the Constitution, the concept of 'minority' has left leaks in the hands of the State which are misused and misused for political benefits, the petition said, adding that the status of a minority is given to Hindus in States where the number of community members has decreased.

In six states and two Union territories, where the number of group members declined according to the 2011 Census, the lawsuit sought minority status for Hindus.

The plea further said, “Their minority rights are being siphoned off illegally and arbitrarily to the majority population because neither the Centre nor the State governments have notified Hindus as a ‘minority’ under the National Commission for Minorities Act. Therefore, Hindus are being deprived of their basic right.”

It has been pointed out that in Mizoram, Meghalaya, and Nagaland, Christians are the majority and there is a large Christian population in Arunachal Pradesh, Goa, Kerala, Manipur, Tamil Nadu, and West Bengal, but they are regarded as a minority group.

However, they are enjoying the “minority” status, and communities, which are real minorities, are not getting their legitimate share, jeopardizing their basic rights guaranteed under Articles 14, 15, 19, and 21 of the Constitution, the petition has said.