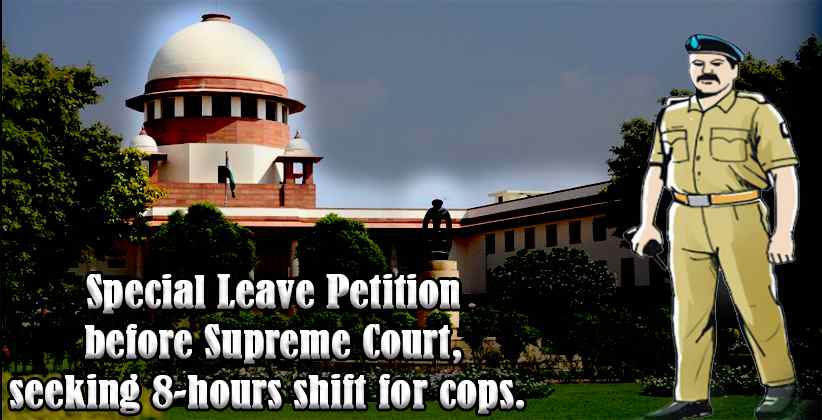 Through this Special Leave Petition, the head constable has challenged the order passed by Punjab and Haryana High Court on December 2019, that dismissed the Public Interest litigation seeking direction to the Chandigarh Police and Police Heads of Punjab and Haryana two introduce 8-hours shift pattern for all the cops along with weekly offs, to ensure efficient and people-friendly policing.

Jagjeet Singh, in his Special Leave Petition, has demanded the implementation of the recommendation of the Bureau of Police Research and Development, 2006, whereby weekly offs and fixed duty hours were recommended.

Bureau of Police Research and Development-

The Bureau of Police Research and Development was set up on 28 August 1970, in furtherance of the objective of the Government of India for the modernization of police forces.

It has evolved as a Multifacet, consultancy organization. At present, it has four branches- research, development, training, and correctional administration. The function of the Bureau of Police Research and Development is divided into these four administrations.

Special Leave Petition is a power to the Supreme Court of India granted by Constitution Article 136. This article says that Supreme Court may, on its discretion, grant special leave to attend on any judgment, decree, determination, sentence, in any cause or matter passed by any court or tribunal in the territory of India. It has been used frequently to obviate the bar put by Article 262 on SC for hearing the matter related to the inter-state riparian dispute.

Special Leave Petition means that an individual takes special permission to be heard in an appeal against any high court or tribunal verdict. Thus, it is not an appeal, but a petition filed for an appeal.

It is a huge instrument of the dispensation of justice from the apex court in the country and holds a prime place Indian Judicial System.