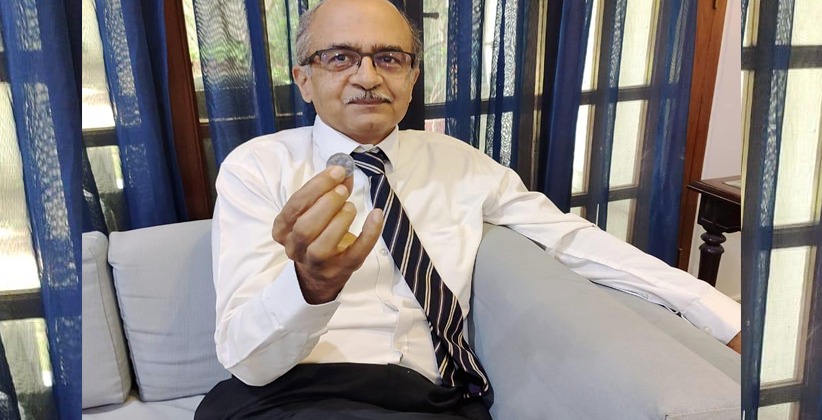 The Supreme Court on Monday (August 31, 2020) fined senior advocate Prashant Bhushan of Re 1 in the contempt case for the tweets made by Mr. Bhushan on the judiciary. The decision was taken on August 25 by the court, after hearing numerous arguments wherein Bhushan refused to apologize for his remarks.

The bench of Justices Arun Mishra, BR Gavai, and Krishna Murari pronounced the judgment. The bench provided that the senior lawyer will be imprisoned for three months and will be debarred from practicing for three years if he defaults on the payment of the penalty. Bhushan was instructed to pay the fine by September 15.

Mishra cited the top court’s precedents to highlight that the in-house procedure should be approached for corruption allegations against judges. “Judges are not supposed to go to the press, their comments outside the court should not have been relied on,” Mishra said.

Mishra added that multiple opportunities were also given to Bhushan to express regret over his remarks. “He [Bhushan] not only gave wide publicity to the second statement but also gave various interviews to press,” the Apex court bench said, “We have considered the sane advice given by the Attorney General, and have concluded that the conduct of present contemnor also needs to be taken into consideration.”

The top court said that Bhushan’s statement, in which he said that offering an apology for his constructive criticism of the judiciary would amount to the “contempt of his conscience”, was made to “influence independent judicial function”. The court noted that freedom of speech was important but the rights of others must also be respected.

Mr. Bhushan, meanwhile, said that he will announce his decision to either pay the fine or face other options during a press conference. He also tweeted pictures of himself holding a Re 1 coin. “My lawyer and senior colleague Rajiv Dhavan contributed 1 Re immediately after the contempt judgment today which I gratefully accepted,” he wrote.

The senior lawyer was held guilty in contempt of court on August 14. The case pertains to two tweets posted by Bhushan on June 27 and June 29. In one tweet, he made a remark about an undeclared emergency and the role of the Supreme Court and the last four chief justices of India. The second tweet was about Chief Justice SA Bobde trying a Harley Davidson superbike in his hometown Nagpur during the coronavirus outbreak.

In the last hearing on August 25, the top court had said it was “painful” to read Bhushan’s statements and justifications with regard to the case. “This is not the way a senior lawyer like Bhushan over 30 years of experience should behave,” Justice Arun Mishra had said.

During proceedings in the case on August 20, the top court had dismissed Bhushan’s request to adjourn the hearing on the quantum of punishment in the case and transfer it to another bench. It had instead given the senior lawyer two to three days to reconsider his remarks about the court and the CJI.

On August 19, Bhushan had moved the Supreme Court seeking to defer the next day’s proceedings to announce his punishment till a review petition was filed and considered.

In his defense, Bhushan told the Supreme Court on August 24 that his tweets were a constructive criticism of the judiciary and that retracting his statement or offering an insincere apology would amount to “contempt of my conscience”.

On August 25, the Supreme Court also referred to a 2009 contempt case against Bhushan to an “appropriate bench” that will take up the matter on September 10. The case is related to Bhushan’s interview with Tehelka magazine 11 years ago in which he made allegations of corruption in the Supreme Court and said half of the previous 16 chief justices were corrupt. The contempt of court case was filed by advocate Harish Salve.