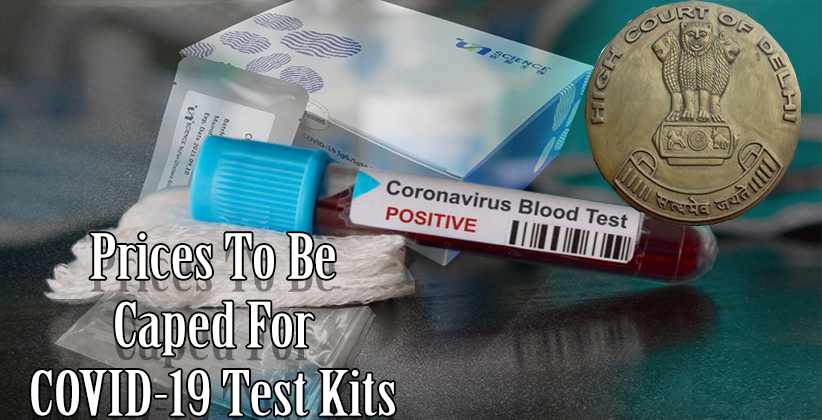 The Delhi High Court has mandated a Medical Equipment Importer to restrict the price of each Coronavirus test kit to ₹400 per kit inclusive of GST, instead of the price at which it was ordered by the Indian Council of Medical Research (ICMR) which was at ₹600 per kit.

In the last weeks of March, ICMR had placed an order for Five lakhs WONDFO SARS CoV-2 Antibody test kits from China at the rate aforementioned,  equating the total price for the order to ₹30 Crores whereas the cost calculated for each test kit totalled ₹245 with the sum for 5 lakh test kits equalling at ₹12.25 crores.

The HC took note of the fact that from the ₹30 Crore which was to be paid by ICMR for the requested 5 lakhs test kits, ₹18.75 crore was to be shared by the distributors - Matrix Labs, Rare Metabolics Life Sciences and Aark Pharmaceuticals.

"The respondent (Matrix Labs) is to supply these goods to petitioner no.2 (Aark Pharmaceuticals) for ₹.20 crores plus 5% GST = ₹.21 crores, at an apparent 45% profit of ₹.7.75 crores," the high court said, while further remarking -"Petitioner no. 2 is to receive an amount of ₹. 30 crores plus GST from the ICMR, for a similar evident profit of ₹.9 crores despite no value addition to the imported medical material,"

The first order lot contained 2.76 lakh test kits and they were delivered to ICMR on 17th April 2020, the invoice for which has been raised but the payment is awaited.

While directing that the test kits be sold at a rate of ₹400 per kit, the high court mentioned, “A profit mark-up of ₹. 155/- i.e 61% on the landed cost price of ₹. 245/- is much on the higher side and in any case more than sufficient for the seller, for the kits/tests to be made available in India for urgent extensive tests through the country...”

The issue came to light when Rare Metabolics Life Sciences and Aark Pharmaceuticals took Matrix Labs to the High court over the due payments for the delivery. The proceedings were held by a Single Judge Bench of Justice Najmi Waziri in the petition by Rare Metabolics Life Sciences who had signed an agreement with the Matrix Lab for being the exclusive distributor of medical products imported into India.

“The country is going through an unprecedented medical crisis affecting public order. People have been cloistered in their homes or constrained to stay wherever they were on 24th March 2020. The economy is virtually at a standstill for the last one month. There is an element of disquiet apropos one’s safety. For people to be assured that the pandemic is under control and for governments to ensure and for agencies engaged in the frontline battle to safeguard people’s health, more kits/tests should be made available urgently at the lowest cost, for carrying out extensive tests throughout the country. Public interest must outweigh private gain. The lies between the parties should give way to the larger public good.”The court said.

The hearing was disposed of on the terms mentioned above.

What is Secularism exactly? How does media change the meaning of secularism?