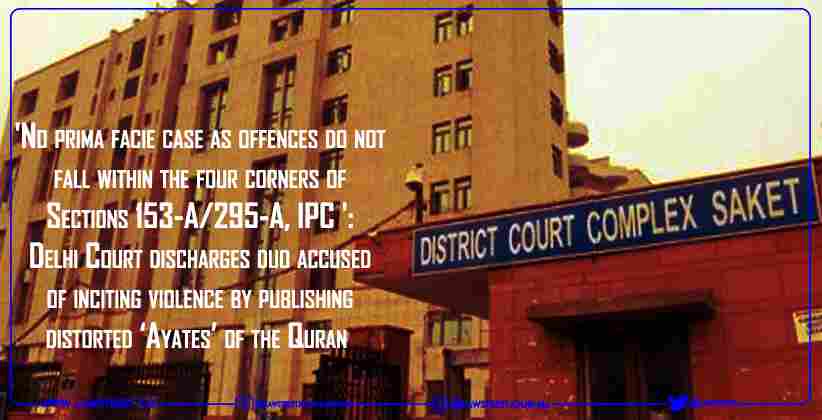 The Metropolitan Magistrate Court of Delhi recently discharged two Accused namely, Inder Sain Sharma and Raj Kumar in a case alleging them of inciting violence between Muslims and other communities by publishing some ‘Ayates’ on posters.

Charges under Sections 153-A and 295-A, Indian Penal Code, 1860 had been pressed against him. The matter was decided in the Court of Justice Shri Z. S. Lorat, Metropolitan Magistrate, Delhi.

The learned APP argued that 'Ayates' at serial No. 2, 5, 9, 11 to 19 and 22 are not available in the Quran Majeed and if any of them are available they are published in their distorted version and appear to be malicious with intent to outrage the religious feelings of the persons having faith in Muslim religion which is clear on the face of it.

Therefore, the main contention of the prosecution is that words in the disputed posters tend to create communal disharmony and is an act with deliberate and malicious intention of outraging the religious feeling of a particular class of citizens of India and is an attempt to insult the religion or the religious belief of the said class.

However, the Defence Counsel explained how Accused had reproduced the disputed posters before the public not with any malice or bad intention nor he has given any bad opinion with regard to holy book of Quran Majeed and words.

In the view of the arguments of both sides, the Judge personally compared the disputed 'Ayates' with 'Quran Majeed' translated in Hindi with notes by Mohd. Farookh Khan and found that most of the 'Ayates' have been reproduced in the posters in its original form as is available in the 'Quran Majeed' except a few words here and there.

Therefore, the Judge was of the opinion that charges pressed on the two accused lacked prima facie merit.

Lastly, the Court of law dismissed the allegations against the both Accused by saying:

“The close reading of all the Ayates published in the posters and read from the book do not in any way give different meanings nor suggest anything that the same were published with malicious intention. Therefore, I do not agree with the contention of the Ld. APP that Ayates No. 2, 5, 9, 11 to 19 and 22 are either not available in Quran Majeed or they are distorted version of the said Ayates.”