The Supreme Court Has Ordered A Three-Member Committee, Led By A Former SC Judge, To Investigate PM Modi's Security Failure. 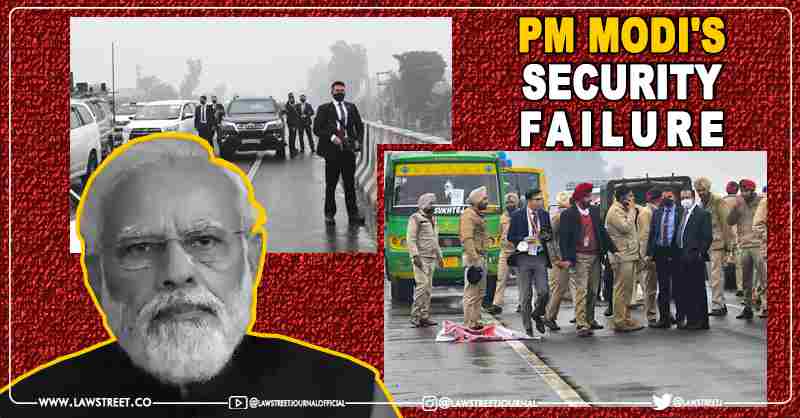 On January 10th, 2022, while hearing the case of Lawyers Voice v. State of Punjab and Others, the Hon'ble Supreme Court said that it will form an impartial committee led by a retired Supreme Court Judge to probe the security failure during Prime Minister Narendra Modi's visit to the state of Punjab on January 5th, 2022.

The Court expressed displeasure at the central government's issuing show-cause notices to the state officials of the Punjab government over the security lapse.

Appearing for the Punjab government, Advocate General DS Patwalia informed the Apex Court that the Punjab government has issued show-cause notices for disciplinary action to seven state officers, including the Chief Secretary and Director-General of Police. They were given only 24 hours to respond to the notices requesting that the Central Government take disciplinary action against them.

"The central government will not give me a fair hearing. Please appoint an independent committee and give us a fair hearing. The Registrar General's records have been taken. So, where is the proof? What foundation did their (the centre's) findings have? On January 8, he was given 24 hours until 5 p.m. Everything is presumptively and predictably against us when we receive a show-cause notice. "I don't expect a fair trial," the Advocate General added."

During the arguments, Chief Justice of India NV Ramana asked the Solicitor General of India, Tushar Mehta, to explain if show-cause notices were issued after an order by the Court last Friday. The Court had orally asked the Centre and Punjab to put on hold the enquiry proceedings of the committees constituted by both the governments till today (10th January).

The Solicitor General also informed the bench that show-cause notifications had been issued prior to the court's order. He then went over the provisions of the Special Protection Group Act as well as the "Blue Book" for PM's security with the bench.

"The Convoy of PM had reached the place, which was 100 m from the protest area. As per the blue book, it would be incumbent upon the officers to ensure that the rules are strictly implemented and the state government should direct such officers so that there is minimum inconvenience..".

According to the Solicitor General, there was a complete failure of intelligence and a breach of protocol. "The fact that the government is defending them is quite problematic," he said. There is no room for complex hearings and long procedures where there are blatant violations of the SPG Act and the blue-book.

The notice was self-contradictory as it sought to enquire if there was a breach and then held the state CS and DG guilty, Justice Surya Kant observed

Yes, there is a breach, and the state has admitted it. But the other issues are questions of facts, and they have to be seen by independent people."

If you want to take disciplinary action against the state officers, then what remains for this court to do?

In response, the Solicitor General said that the case should be placed on hold until the Central Committee reviews it and submits a report to the Court.

The Punjab Advocate General, on the other hand, has conveyed his dissatisfaction with the Central Committee. MHA's head is the person in charge of the committee; MHA has already determined that we are guilty; what will it do now? This committee is a waste of time. This committee has no chance for me! Please appoint an impartial committee ".

After a brief discussion, the judges decided to ask for an independent investigation to be led by a former Supreme Court judge. The court stated that investigations into the incident will be halted for the time being, but that a more specific order will be issued soon. It also ordered Punjab Police and Special Protection Group (SPG) officers, as well as other federal and state agencies, to cooperate and give support.

What happened at the previous hearing?

On January 7, 2022, the Hon'ble Supreme Court granted a petition seeking the suspension of Punjab's Chief Secretary and Director General of Police for security lapses during the Prime Minister's visit to the province. All committees established by the Centre and the State to investigate the event should not function until Monday, January 10th, 2022. After protesters allegedly obstructed the route, the Prime Minister's convoy was stranded on a flyover in Hussainwala for around 20 minutes. The security breakdown was placed on the Congress government in Punjab by the central government and the Bhartiya Janata Party (BJP).