Judiciary Nov 18, 2020 Atharwa Gauraha ( Editor: Ekta Joshi ) 5 Shares
5 Shares
The HP High Court directed the state government to increase the number of ventilators and beds in COVID hospitals and COVID health centers, as well as to increase the distribution of oxymeters among patients needing coronavirus.

A Division Bench comprising Chief Justice L. Narayana Swamy and Justice Anoop Chitkara passed the orders on a petition taken up suo moto as public interest litigation (PIL) on a news item published in The Tribune on November 10, 2020, under the headline “IGMC COVID ward packed to capacity after spurt in cases”. The court had given a notice to the government in its earlier order and ordered it to make submissions on the measures taken in this regard.

Advocate General Ashok Sharma argued that COVID patients were given sufficient care in the state and were not facing hardships. In a tabulated form, he submitted the district wise/ hospital wise vacancy location of beds in various COVID hospitals/ medical colleges in the state. He reported that in Dedicated COVID Care Centers in Bilaspur, Chamba, Hamirpur, Kangra, Kinnaur, Kullu, Lahaul and Spiti, Mandi, Shimla, Sirmaur, Solan and Una districts, there are 2,401 vacant beds for COVID patients and 2,583 isolation beds (including ICU beds) in Dedicated COVID Care Centers in the state. Amicus Curiae BC Negi, a senior advocate, said it was a fundamental responsibility of the state to provide appropriate medical care to the citizens. It was not necessary to allow short-term economic gains to threaten long-term public health and welfare, he said and proposed restricting the entry of visitors and outsiders into the state. He also offered suggestions such as increased testing and contact tracing; online training and protocols to help provide frontline staff with training; successful, free, and massive screening; promoting e-commerce; taking into account time-specific constraints on economic activities; promoting e-learning but ensuring sufficient infrastructure availability; odd-even (valley-mountain side) shops scheme in marketplaces; economic incentives and assurances such as soft loans to people dependent on tourism, cash transfers to daily-wage earners; increase in containment zones and supplement the PDS scheme with a community kitchen. After going through the submissions, the court noted that in the Dedicated Covid Hospitals in the state, adequate ventilators were not provided, as four ventilators were available in the Bilaspur district and only one in the Sirmaur district.  The court also ordered the state to look at the suggestions made by the amicus curiae on November 23 to encourage individuals and make submissions in this regard. 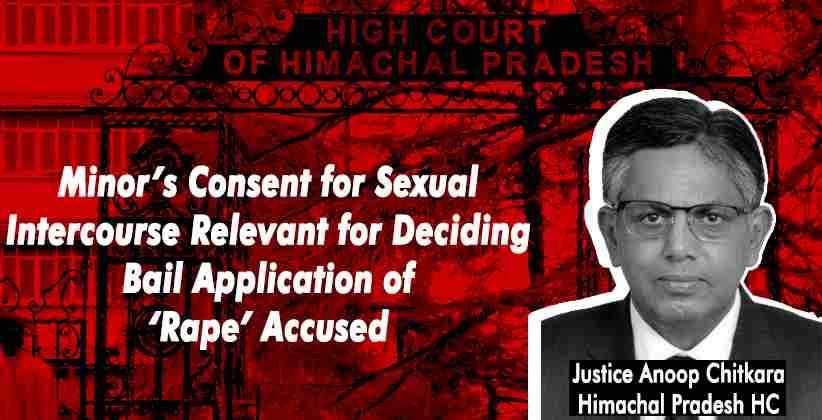 Judiciary Nov 17, 2020 M V Manasa ( Editor: Ekta Joshi ) 14 Shares
14 Shares
Bail was recently granted to a man accused of raping a minor girl by the Himachal Pradesh High Court on the ground that the girl gave consent to the sexual intercourse.Justice Anoop Chitkara observed that, “Although, she could not have consented for sexual intercourse as well as leaving custody of a custodian but for deciding the bail, her conduct is sufficient to grant bail to the petitioner.”Accused Rohit Sharma, 20 years old, approached the High Court seeking regular bail on the grounds...
Read full post