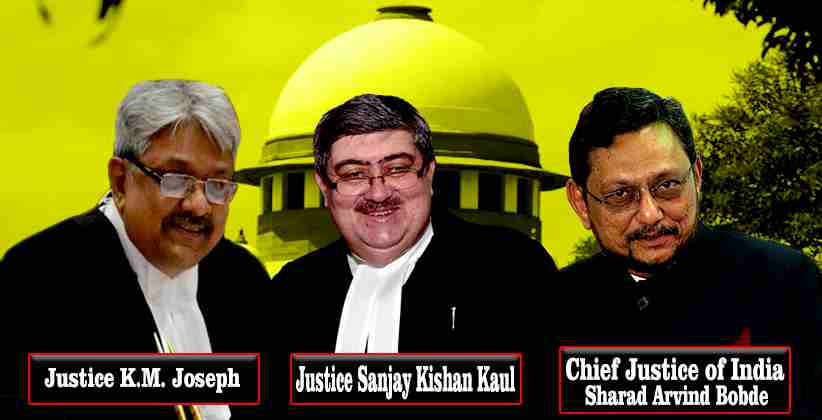 The Supreme Court of India today (February 17, 2020) has asked the Registrars of all the High Courts in the country to apprise it of the total number of vacant positions existing as of now, expected future vacacies and the time period required to make recommendations regarding the filling up of such vacant positions. The Attorney General KK Venugopal, appraised Court of the fact that the government alone was not responsible for delay in appointment but it was also the collegium. He cited the example of Justice PV Kunhikrishnan whose appointment took two years to come through. Venugopal said, "he gave a speech mentioning the two year delay. It was sad."

The Apex Court, earlier in the matter on 6th December 2019, had reprimanded the government for the delay in appointment of several High Court Judges which were recommended by the collegium which was led by the Chief Justice of India.

As per the data available with the Department of Justice, there are 424 vacancies out of 1,079 sanctioned strength of high court judges as on November 1 2019, Friday.

For the record, the government had rejected and returned around 100-odd suggested names with several objections, however, the CJI-led Collegium re-recommended the same names.

According to a leading news portal, the Times of India, when the bench comprising of Justice Sanjay Kishan Kaul and Justice K.M. Joseph questioned the delay and said that once the names were re-stated, it was a “fait accompli” on the part of the Government to make the appointments. To further establish the same fact, the bench referred to three different Supreme Court Judgements which made it clear that the there exists a liability on behalf of the Centre to appoint them once the collegium has reiterated the same names.

When responding to the Bench, Attorney General K.K. Venugopal put the blame on the High Court Collegium for not starting the initiative of the appointment process 6 months prior to the vacancies coming into light. In answer to this, the Court asked him to abstain from indulging in this blame game and also not going on the path to make it an adversarial issue.

Under the existing memorandum of procedure (MoP) for appointments of the judges to the Supreme Court and high courts, it is necessary by the collegium to make recommendations “six months prior to occurrence of vacancies”. But this is hardly ever done.

To add the cherry on the cake, the Bench also stated that Good and Potential candidates were being persuaded away because they started to withdraw their names stating “sheer delay.”

According to the same news portal, Kapil Sibal was spotted by the bench sitting in the courtroom, and said he would “know better” about the vacancies in the high courts as he had been a law minister. Sibal replied, “I know a lot more but I am keeping quiet.”

But when we look at the bigger picture, not only the government but also the Collegiums of various High Courts are to be blamed. It is certain that the Government has played a part in the rising numbers of vacancies undoubtedly but the higher judiciary also didn’t provide any names to fill up their 221 vacancies.

To provide the stats, when checked on 13th December 2019, the high courts of Chhattisgarh, Delhi, Jharkhand, Madhya Pradesh, Orissa, and Punjab and Haryana didn’t recommend any names for the vacancies to be filled from the Bar itself. To know the audacity of the situation, these vacancies have been existed for over 5 years, and the oldest vacancy dates back to 24th April 2011 which is around 9 years ago. A similar issue can be seen in District and Session Courts. Even the Chief Justices of India, down the line, were informed but there have been very little changes in the framework.

The Bench, in its seven-page order, noted that the various High Courts’ collegiums were yet to send recommendations for 197 vacancies.

A former Supreme Court judge who was one of the members of the collegium, was asked for a comment on the failure of high court collegiums to recommend names before the vacancies arise. “Yes, there is no doubt there is delay on our part too. But it is mostly procedural or due to the lack of suitable candidates,” said the judge, on the condition of anonymity.

“The government, especially the current government, seems to be on a spree to stall names recommended by the collegium without any reason. In several cases, even after the SC collegium reiterates a name, this government sits on those named indefinitely without assigning any reason. Unfortunately, this seems to have become the norm rather than an exception.”

The Supreme Court said filling up vacancies in the subordinate judiciary while the High Courts grow thinner would only create a logjam of cases.