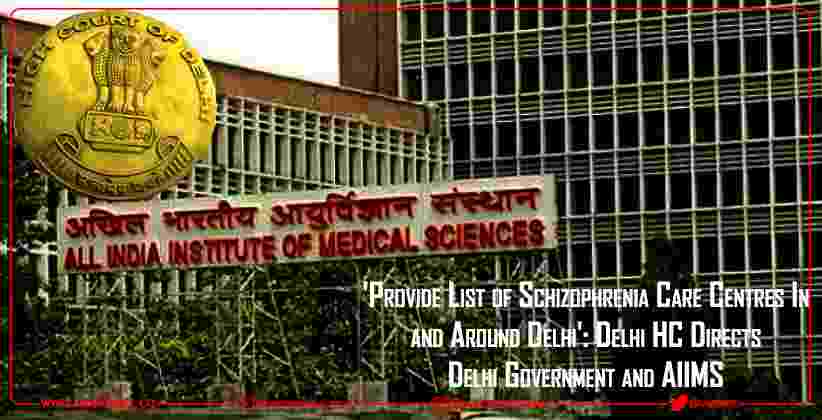 The Delhi High Court during the previous week asked the Delhi Government and the All India Institute of Medical Sciences (AIIMS) to submit information  regarding the facilities available in and around the national capital which provide care and treatment to patients suffering from schizophrenia.

The Bench presided by Justice Prathiba M. Singh has asked the Delhi government, AIIMS, and the Counsel for the petitioner to give the list of such facilities before the next date of hearing held on  April 27.

The instant petition that was filed by the petitioner seeking various reliefs and directions to respondents in view of the mental condition of petitioner's son, which is the age of 32 years.

The Court, on 26th of March 2021, asked for a report from AIIMS as to the OPD card of the Petitioners son, as also the events which transpired on the admission of the Petitioner's son to AIIMS.

AIIMS in its report submitted that a Senior Resident in Psychiatry at AIIMS had examined the Petitioner's son and had diagnosed him with `Schizophrenia'.

It was also contended that the Petitioner's son was to be admitted in the Psychiatry Ward of AIIMS, after being tested for COVID-19, as per protocols, during which period, he escaped from the hospital premises.

To this, the Court ordered,

"Considering the nature of the matter and the medical condition of the Petitioner's son, it is deemed appropriate to direct the ld. Counsel for the Petitioner and the other counsels appearing for the Respondents to place on record a list of facilities in and around Delhi, which provide care and treatment to patients of Schizophrenia."

The Court has permitted the Petitioner to contact the SHO of the concerned area, if there was any threat to her and her husband in any manner due to the alleged violent and aggressive nature of her son.

As per the Court's Order, the SHO concerned has been directed to straight away attend to the concerns of the Petitioner, however, the SHO has been asked to ensure that no regular visits to the Petitioner's house be done until and unless the Petitioner calls for assistance/help.

The matter has now been moved for further hearing on April 27, 2021.