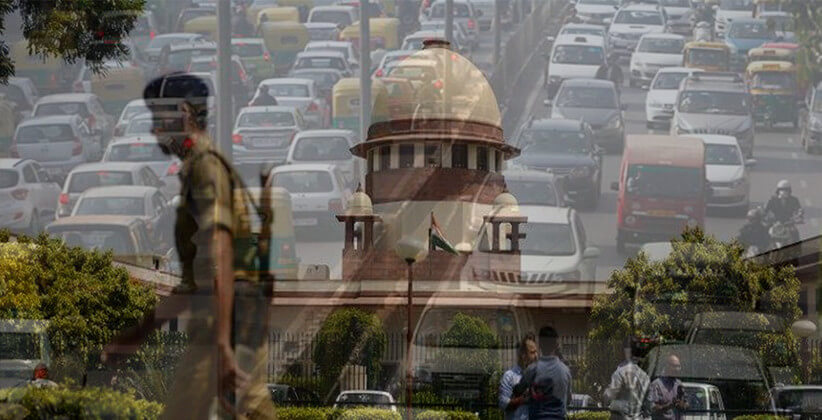 The Supreme Court on July 1, 2019, in the case of Satvinder Singh v. State of Bihar has held that a private vehicle on public road will fall within the definition of "public place" under Bihar Excise (Amendment) Act, 2016.

In this case, the appellants were travelling in their car from Giridih in Jharkhand to Patna. Their vehicle was stopped at the Rajauli Check Post at the Bihar Jharkhand border for a routine checkup.

On checking, the police did not find any liquor or anything incriminating in the vehicle. However, as per prosecution, when the appellants were subjected to breath analyser test certain quantity of alcohol was found.

Pursuant to this, the appellants were charge-sheeted under Section 53(a) of the Bihar Excise (Amendment) Act, 2016. The Chief Judicial Magistrate, Nawada took cognizance of the case by way of an order passed in July 2016. The appellants approached the Patna High Court seeking quashing of the FIR but when the court dismissed their plea they moved the Supreme Court.

Before the Supreme Court, the appellants contended that the vehicle in which they were travelling cannot be said to be public place within the meaning of Section 2(17A) of Bihar Excise (Amendment) Act, 2016.

They submitted that as per section 53(a) of the Act, consumption of alcohol in a public or prohibited area in the territory of State of Bihar is an offence. As no alcohol was found on person or vehicle of the appellants, the FIR against the appellants was not maintainable.

As per Section 2(17A) of the Bihar Excise (Amendment) Act, 2016, "Public Place" means "any place to which public have access, whether as a matter of right or not and includes all places visited by general public and also includes any open space.”

According to the Court, the key word in the definition was "access". Any place to which public have access, whether as a matter of right or not, is a public place.

It observed that public can have access to a private vehicle on a road. The court noted that 'access' has been defined in Black's Law Dictionary as "A right, opportunity, or ability to enter, approach, pass to and from, or communicate with access to the courts."

"When private vehicle is passing through a public road it cannot be accepted that public have no access. It is true that public may not have access to private vehicle as matter of right but definitely public have opportunity to approach the private vehicle while it is on the public road. Hence, we are not able to accept the submission that vehicle in which appellants are travelling is not covered by definition of 'public place' as defined in Section 2(17A) of the Bihar Excise (Amendment) Act, 2016,” the court said.

Further, the court added that "The ommission of public conveyance in the definition of Section 2(17A) brought by the Bihar Excise (Amendment) Act, 2016 also indicates that the difference between public conveyance and private conveyance was done away in the statutory amendment. We, thus, cannot accept the submission of the learned counsel for the appellant that private conveyance will be excluded from the definition of 'public place' as contained in Section 2(17A).”

But the court observed that this position has changed now with the enactment of the Bihar Prohibition and Excise Act, 2016. As per this Act, another category of offences have been included in Section 37 which provides for a situation explained as: “is found drunk or in a state of drunkenness at any place".

Thus, as per Bihar Prohibition and Excise Act, 2016 even if a person consumes liquor outside the State of Bihar and enters into the territory of Bihar and is found drunk or in a state of drunkenness, he can be charged with offences under Section 37(b).

However, since the same was not provided for in Bihar Excise (Amendment) Act, 2016, the appellants will get the benefit of the same.

The court, however, said that it will not be able to decide whether the appellants actually consumed liquor in the territory of Bihar or not.

The same needs to be decided by the Magistrate after looking into the materials brought on record by means of the chargesheet, the court said.

It, therefore, ordered that the appellants shall be at liberty to file an application to discharge before the Magistrate who after considering the materials on record shall decide the said application in accordance with the law.