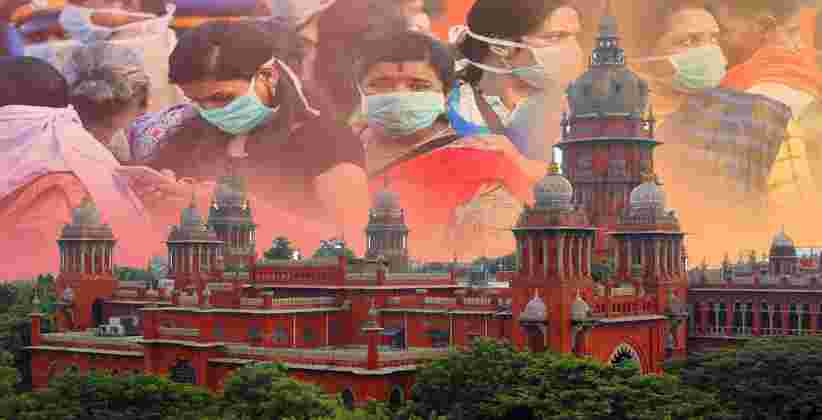 While hearing a writ filed before the Madras High Court by a practicing lawyer, the division bench of Justice M. M. Sundresh and Justice R. Hemalatha on September 17th, 2020 directed the State Government to strictly implement the amended rule which indicates the punishment for non-wearing of a mask, violating social distancing, spitting in public, etc. which became pursuant to the above government order dated September 4th, 2020. The court also said to publicly advertise the rules and punishments to make people aware. The petitioner N. Rajkumar, a young lawyer was seeking appropriate actions and step from the respondent’s side in accordance with the provisions of The Prohibition of Smoking and Spitting Act, 2002 in the light of current Pandemic Situations.

The Petitioner filed the plea under Article 226 of the Constitution of India and prayed before the court to issue a writ of Mandamus for respondents. The Petitioner contended before the court to direct the respondents to ban spitting and make it a punishable act under Prohibition of Smoking and Spitting Act, 2002; to direct the public health board to provide public sanitary conveniences and regulate deposit of rubbish/ garbage on streets in total implementation of prohibition of defecation in Open Place Act, 2019 passed by the Government of India; managing and differentiating waste in a scientific manner and more particularly medical hazardous and toxic waste and other plastic waste in order to prevent the spread of COVID Pandemic and other epidemics an further to prevent environment pollution and also the authorities should file a report on disposal track of such waste; monitoring that all the staff of private and government establishments are provided with sufficient toilets and levy penalties on faulting staff if found defecating on public streets/roads and implementing the Solid Waste Management Rules, 2016, strictly all over the state of Tamil Nadu and levy penalties as per the act on the persons who have not implemented the same in violations of the said Act. Further, spreading awareness in the public by the installation of the board at all public places and spread a message of practicing social distancing and wearing of appropriate masks which will prevent infection.

It was also noted further that relevant rules were made in exercise of the powers conferred under Section 138-A of Tamil Nadu Public Health Act, 1939, according to which rules have been made indicating punishment for no-wearing of the mask, violating social distancing, etc.

The Court further said that “Though the aforesaid rule has come into being, the learned counsel for the petitioner submitted that it has not been followed in letter and spirit. We have already issued appropriate directions earlier to the authorities in the State of Tamil Nadu to implement the provisions strictly. We only reiterate that the amended Rule which came into being pursuant to the above said Government Order dated 04.09.2020 will have to be implemented strictly by the respondents. Due publicity will have to be given on the Rule and the action that is likely to be taken. Insofar as the other issues sought to be raised by the learned counsel for the petitioner with respect to segregation of medical wastes with the other wastes, we are not willing to go into the same for want of appropriate respondents. Accordingly, we are not inclined to go into the same. However, liberty is given to the petitioner for filing a comprehensive writ petition”. The writ petition thus stands disposed of.