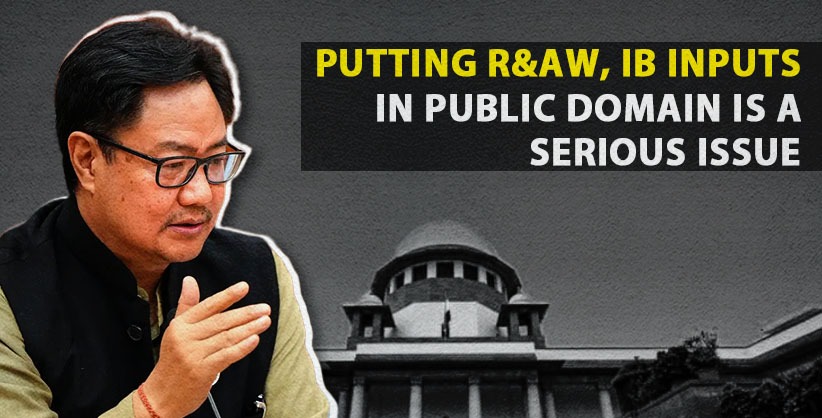 NEW DELHI: In its ongoing friction with the judiciary, Law Minister Kiren Rijiju on Tuesday sounded a note of concern with the Supreme Court Collegium publishing inputs of Research & Analysis Wing (R&AW) and Intelligence Bureau (IB) on candidates recommended for judgeship, saying it is a serious issue.

In his address to the media at the felicitation of award winners of the e-courts project, Rijiju said that putting out sensitive inputs of R&AW and IB in public is a serious issue and he will speak more about it at a later point in time.

He said if a person is working for the nation, then he may think one day his R&AW and IB files can be made public.

“It is a matter of concern.... It is a serious issue and one day I will speak on this," he said, in  response to a query regarding Collegium’s recent statements, disclosing the objections raised by the Central Government to recommendations made regarding the judges' appointment.

The Collegium cited inputs by R&AW and IB on candidates, whose files were returned by the Centre to for reconsideration.

On Monday, the Minister had fired a fresh salvo against the judiciary by saying judges don't face public scrutiny, they don't stand for elections but are being constantly observed by people.

"The people are watching. How you work, what you do, your judgements. People are seeing this and forming opinions. No one can hide in the time of social media," he said.

He was speaking in a programme organised by Delhi Bar Association.

On Sunday, he tweeted a video by a retired high court judge, Justice R S Sodhi who said the Supreme Court “hijacked” the Constitution by deciding to appoint judges itself. The Minister said he considered the former judge’s view “sane”. The Law Minister said the majority of the people have similar views.

Sharing the interview by a portal LawStreet Bharat, Rijiju tweeted , “Voice of a judge...Real beauty of Indian Democracy is- it's success. People rule themselves through their representatives. Elected representatives represent the interests of the people & make laws. Our Judiciary is independent and our Constitution is Supreme”.

In the interview, Justice Sodhi had said the right to frame laws lies with the Parliament and added that the Supreme Court cannot frame laws as it does not have the right to do so.

Earlier too, Rijiju had said nowhere in the world, judges appointed themselves as judges. On January 6, he wrote to the CJI for including a government nominee in search-cum-evaluation committee as per the Memorandum of Procedure, in line with the 2016 SC's Constitution bench decision in the NJAC case.