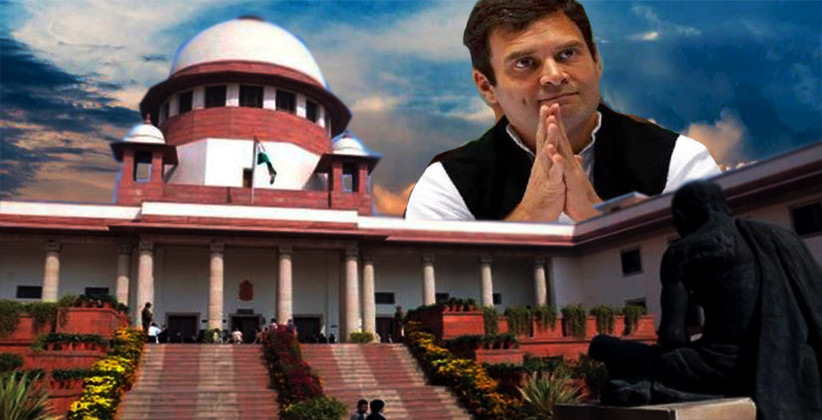 The Indian National Congress President Rahul Gandhi today (May 8, 2019) has filed an affidavit in the Supreme Court tendering an unconditional apology for attributing the ‘Chowkidar Chor Hai’ remark to the apex court.

The affidavit filed through advocate Sunil Fernandes, states that “The Deponent unconditionally apologises for the wrongful attributions to this Hon’ble Court. The Deponent further states that any such attributions were entirely unintentional, non-willful and inadvertent.”

In his affidavit, the Congress President reiterated that he holds the court in the highest esteem and respect and has never sought or intended to, directly or indirectly, commit any act that interferes with the process of administration of justice.

Tendering unconditional apology, Gandhi prayed from the court to close the contempt proceedings that was initiated on a plea filed by BJP MP Meenakshi Lekhi.

Ms. Lekhi objected to his ‘Chowkidar Chor Hai’ statement, in reference to Prime Minister Narendra Modi that was allegedly made in response to the Supreme Court’s judgment concerning the maintainability of the Rafale review case.

On April 15, 2019, a Bench comprising of Chief Justice of India Ranjan Gogoi and JusticesDeepak Gupta and Sanjiv Khanna sought Gandhi’s explanation after clarifying that the statement made by Gandhi on the Rafale case verdict was “incorrectly attributed” to the apex court.

“We make it clear that views, observations, findings attributed to this court in the alleged speeches, remarks made by Mr. Gandhi to media/public have been incorrectly attributed to this court. We also make it clear that this court had no occasion to make such observations in as much as deciding legal admissibility of certain documents which were objected by the attorney general,” the Bench had said.

Subsequently, Gandhi filed an affidavit submitting that the comment was made in the “heat of the political campaigning” and that is was misused by his political opponents.

On April 23, 2019, when the apex court issued notice in the matter, Gandhi stood by his statement in so far as it relates to Prime Minister Narendra Modi. However, Senior Advocate A.M. Singhvi, appearing for Gandhi expressed regret for attributing the slogan to Supreme Court.

On a request made by Singhvi, the court permitted Gandhi to file an additional affidavit in the case.