Ram Mandir-Babri Case: SC Declines To Refer To Larger Bench The Issue Whether Mosques Are Integral To Islam. [Read Judgment] 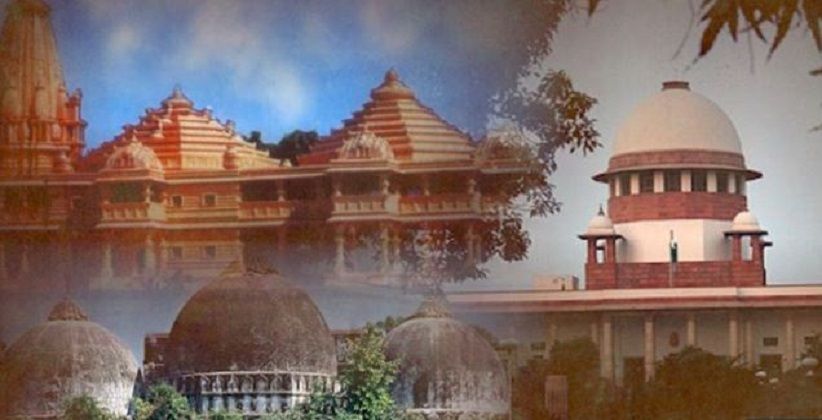 The Supreme Court today (September 27, 2018) by 2:1 majority declined the need to refer the Ram Mandir-Babri case to a Constitutional Bench. Thereby, upholding the 1994 judgment in Ismail Faruqui v. Union of India in which the Supreme Court had observed that a mosque was not an essential part of the practice of the religion of Islam and namaz could be offered anywhere, even in open.

The landmark judgment was delivered by a Bench of Chief JusticeDipak Misra and Justices Ashok Bhushan and S Abdul Nazeer.

Justice Bhushan wrote a judgment on behalf of himself and CJI Misra, while Justice Nazeer wrote a dissenting judgment.

Justice Bhushan held that the Ismail Faruqui judgment will not impact the decisions in suits. Thus, the majority opinion held that there was no need for the matter to be referred to a Constitution Bench.

Justice Nazeer, however, dissented from the majority opinion by observing that questionable observations in Ismail Faruqui have permeated the Allahabad High Court verdict. He was of the opinion that Ismail Faruqui needs to be brought in line with the Shirur Mutt case.

The court on July 20, 2018, had reserved its verdict after hearing Senior Advocate Rajeev Dhavan and other Senior Counsels in the matter.

Below is a timeline of the case:-

1885: A suit was filed by Mahant Raghubar Das in the Court of the Sub-Judge, Faizabad, against the Secretary of State for India, to seek permission to construct a temple on the land adjoining the Babri mosque.

1949: The government proclaims the premises a disputed area and locks the gates after idols of Lord Ram appear inside the mosque allegedly placed there by Hindus. Thereafter, both parties filed civil suits and a receiver was appointed.

1950: Gopal Singh Visharad filed a suit in the Faizabad civil court seeking exclusive rights for performing puja for Lord Rama. He seeks a restraint order on the removal of idols on which the judge issued a temporary injunction. This order is later confirmed by a Division Bench of the Allahabad High Court.

1959: Nirmohi Akhada filed a suit, seeking transfer of charge of the disputed site from the receiver.

1961: UP Sunni Central Board of Wakfs filed a suit for the declaration and possession of the Babri site.

1964: All three suits filed by Hindus and the one filed by the Waqf Board are consolidated becoming the main case in the dispute.

1986: On a petition of one Hari Shanker Dubey, Faizabad Session Judge allows Hindus to worship at the site and the locks are re-opened. Muslims set up Babri Mosque Action Committee in protest.

1989: VHP steps up the campaign, laying the foundations of a Rama temple on the land adjacent to the disputed Mosque. Former VHP vice-president Justice Deoki Nandan Agarwal files a case, seeking the Mosque to be shifted elsewhere.

November 9, 1989: The then Prime Minister Rajiv Gandhi, allows ‘shilanyas’ or ground-breaking ceremony, at an undisputed site.

1990: The then BJP president L.K. Advani launches a Rath Yatra.

December 6, 1992: Babri Masjid demolished to the ground by a Hindu mob, resulting in widespread clashes between Hindus and the Muslims.

December 16, 1992: MS Liberhan Commission headed by Justice Liberhan is constituted by the then Prime Minister PV Narasimha Rao to investigate the circumstances that led to the demolition of the Babri Masjid.

1993: President Dr. Shankar Dayal Sharma sends a single-point reference under Article 143 to the Supreme Court to decide whether a Hindu temple existed in the area on which “the structure” stood.

1994: The SC declines to answer the Presidential Reference and returns it.

2002: The Allahabad High Court directs the Archaeological Survey of India (ASI) to excavate the site to determine if a temple lay underneath. ASI says there is evidence of a temple beneath the mosque, but Muslims dispute the findings.

2003: UP court rules that seven Hindu leaders should stand trial for the destruction of the Babri Mosque, but no charges are brought against Advani.

2004: UP court in Uttar Pradesh rules that Advani’s role should be reviewed.

September 23, 2010: A day ahead of the Allahabad High Court verdict, the Supreme Court agrees to hear a plea for deferment of pronouncement of judgment by the High Court; Orders High Court not to pronounce the judgment till the deferment plea is heard by the SC.

August 10, 2015: Parties seek appropriate directions to be issued to all concerned to file their compilations of the voluminous record in suitable numbers.

Court refuses to issue any directions instead stating that counsel for the parties may appear before the Registrar and work out a satisfactory and agreeable method by which documents may be translated, collated, compiled and filed by the parties concerned.

August 11, 2017: Court grants 12 weeks’ time to all the parties to file the English translation of the exhibited documents.

December 5, 2017: Senior advocate Kapil Sibal submits before that the matter should be heard only after the completion of 2019 Lok Sabha elections. Senior advocates Rajeev Dhavan and Dushyant Dave also echoes Sibal’s arguments and seek leave to recuse themselves from the proceedings.

Court turns down the same. Lists the matter for February 8, 2018, for arguments.

February 8, 2018: Senior Advocate Rajeev Dhavan, appearing for Sunni Waqf Board, seeks a day-to-day hearing in the case, but the Bench turns it down. Lists the case for hearing on March 14, 2018.

March 14, 2018: Senior Counsel Rajeev Dhavan submits that the matter deserves to be referred to a larger Bench. The Court agrees to the same.

July 20, 2018: Court reserves verdict on the question of reference to larger Bench.

September 27, 2018: Supreme Court declines to refer to larger bench the issue whether mosques are integral to Islam. The Supreme Court sets October 29, 2018, as the next date to hear the Ayodhya title dispute.