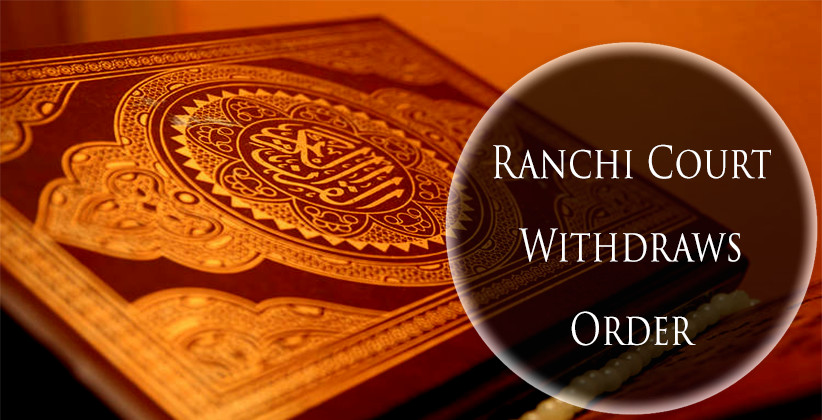 The Judicial Magistrate Court, Ranchi on July 17, 2019, has withdrawn the controversial order passed against a 19-year-old girl to donate copies of the Quran to obtain bail after she was arrested for an alleged inflammatory post on Facebook.

The court of first-class judicial magistrate Manish Kumar Singh withdrew the order after police submitted an application for modification of the bail condition as it was difficult to implement.

The court in its modified order said: “The investigating officer has prayed that the condition of donating the Holy Quran by the petitioner may be done away with because of difficulties in its implementation. Having heard submissions of learned APP, this court modifies its earlier order by dropping the additional condition of distribution of copies of Holy Quran by the petitioner. Accordingly, the order dated 15 July is modified upto this extent.”

On July 12, 2019, Richa Bharti was arrested for offences under Section 153A (promoting communal hatred) and 295A (hurting religious sentiments) of Indian Penal Code, 1860, on a complaint by Sadar Anjuman Committee at Pithoriya near Ranchi over a post shared by her on Facebook regarding the lynching of Tabarez Ansari.

Allowing her release on bail after three days of custody, the Magistrate said:

"The Court cannot ignore the fact that religious harmony must be maintained in our society, one must respect sentiments of other religion as well. Considering the age of the petitioner and the nature of offence as alleged, in order to neutralize the situation, this Court thinks it proper to impose one additional condition to donate give copies of Holy Kuran, out of which one copy may be gifted to Sadar Anjuman Committee, Pathoria and rest four copies may be donated to Government University/College/School of Ranchi by way of bona fide gesture and submit a report within 15 days.”

Following the verdict, the Ranchi District Bar Association staged a protest rally and boycotted the Magistrate's Court on July 17, 2019. The Association said that the order could affect the psyche of the woman.

A delegation of the RDBA met the Judicial Commissioner Navneet Kumar and requested him to take a reasonable decision on the issue.

"The JC has assured that he would take a decision within two days. The RDBA would abstain from judicial activities in the JM's court on Thursday as well. We are also demanding his transfer,” said RDBA general secretary Kundan Prakashan.

Responding to the modified order. Bharti said it was a victory against an order that was violating her fundamental rights. “I will go to higher judiciary to ensure punishment to those who have abused me on facebook and threatened me of dire consequences,” she said.