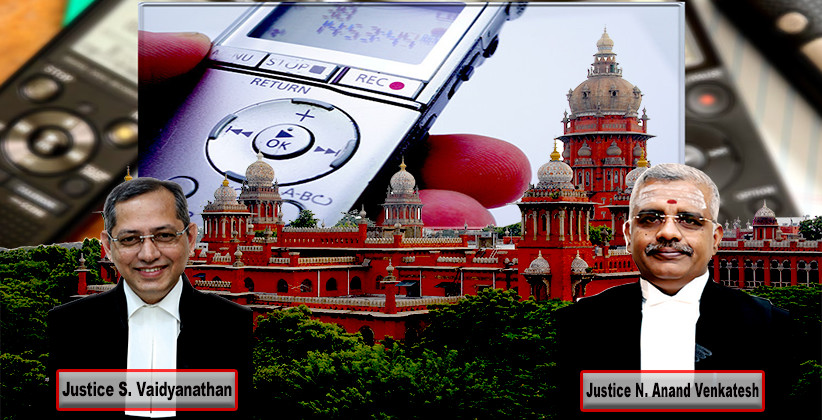 The Madurai Bench of the Madras High Court on November 29, 2019, in the case of Satheesh Kumar & Ors. v. Inspector of Police directed that investigating officers should take advantage of the technology available to the present day mankind, and start recording witness statements especially in cases of grave and heinous crimes, i.e., punishment for which is 10 years or more.

A Division Bench of Justice S. Vaidyanathan and Justice N. Anand Venkatesh was hearing appeals filed under Section 374 (2) of the Code of Criminal Procedure, 1973 for offences committed under Sections 449 and 302 of the Indian Penal Code, 1860.

The court issued certain guidelines for the recording of evidence and asked the prosecution to file a status report in the matter within three months and come up with a plan of action to implement these guidelines. The bench ruled that Section 161 (3) of the Code of Criminal Procedure, 1973 already provides a mechanism for the audio and video recording of evidence.

With regard to this section, the court held that, “It does not require a direction from this Court to implement this and the police department by itself should have started this process long back. This provision is available in the Code for the last ten years and it remains to be a dead letter without being implemented.”

Though not mandatory, these guidelines are important because in many cases involving heinous crimes against women and children the witnesses turn hostile and the accused despite being guilty end up being acquitted for lack of evidence.

Apprehensions by the prosecution regarding the audio-video recording of the witness statements such as tampering or leaking of recordings on social media were brushed aside by the court.

Fixing Of Circle Rates Is A Policy Making Decision Of The Govt Which Court Cannot Interfere With: Delhi HC [Read Judgment]