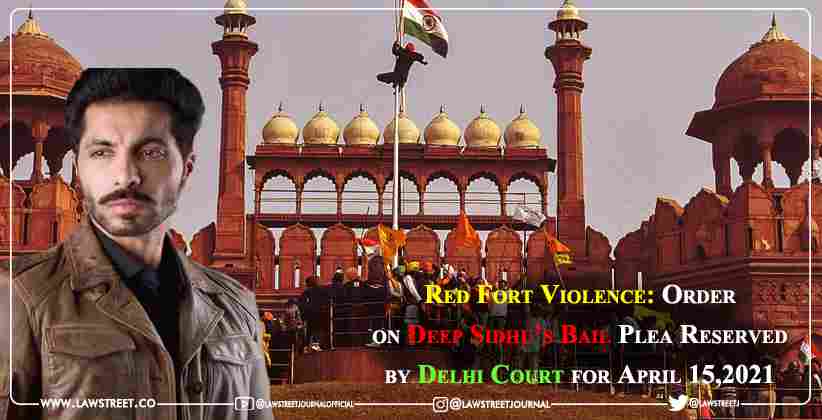 On Monday (April 12, 2021), orders were reserved by a Delhi Court in the bail application that was filed by Deep Sidhu who has been accused in the Red Fort violence case pertaining to the farmer’s tractor rally so as to decide the jurisdiction of the appropriate court to hear the matter.

Deep Sindhu has been alleged as the “main instigator” in the said incident of inciting violence by the Prosecution.

The order was reserved by Additional Sessions Judge, Abida Parveen.

Appearing on behalf of the state, Public Prosecutor submitted, that various interviews given by the Accused show his “intention for committing violence to blame our country, to disregard our national flag, to disregard our police personnel where several were injured.”

This submission was in response to the previous Vios order of the Court in which it had directed the parties to substantiate their allegations by submitting the relevant transcripts.

"This interview is showing his intention for committing violence to blame our country, to disregard our national flag, to disregard our police personnel where several were injured. He was not intending to follow the route which was provided for the march. On 26th January at Red fort, while instigating another person, Sidhu was seen at Red Fort to hoist Nidhan Sahib Flag. A screenshot of a video is also available."

Another main allegation on Sidhu has been that while he was instigating the mob at the Red Fort, the National Flag had also been thrown in his presence by the protestors and he did nothing in response to this disrespect.

PP said, “After flagging Nishan Sahib, he came down and started announcing through a loud hailer that other leaders must also reach red fort to take charge by saying that protestors have creed a history at Red Fort in India. There was a purpose behind calling others. The purpose was to start a new morcha at Red Fort. Deep Sidhu further instigated the mob by saying " Salam hai aapko. Aapne ithihaas rach diya hain. Humne shanti se kardia hain."

Sidhu was represented by Advocate Abhishek Gupta who claimed that the Prosecution decided to “pick and choose” from his interviews.

He contended, "It is extremely unfortunate. It is just pick and choose. We have placed on record the complete transcripts, whether it's instigation or its merely a dissent. This has to be seen as a whole."

He also argued the difference between instigation and protest and how this was a case of the latter.

He argued saying, "I am a popular face. People know me there. He is going there for unity. My lords will see that nowhere in the transcripts he has taken the name of red fort even once. By this, logic all the 10,000 people who went there must be made accused in the matter. How can those 10,000 people be made accused? Is this possible?”

Gupta also went on to contend, "All these videos are with the Investigating agency. They have picked and chosen. He knows what is the difference between protest and Instigation. He is a lawyer. Their entire case is that I hoisted the flag. I am not the one who is hosting it. There are pictures and videos showing it. Indian flags are seen in the background. There is no disregard. People were throwing Indian flags so can those 1000 people be implicated? It's very debatable if this is even a crime or not. I have not asked anyone to hoist the flag."

While contending for his client, Gupta also argued the presumption of innocence was in their favour by saying, "He is repeatedly saying to be in unity, that he is not violent. At the spot before vio,lence he is saying this. I ask myself a question this he instigating people? It is a positive proof. Even if two views are available, take one in my favour."

Sidhu had submitted, "merely shouting common spiritual slogans or presence at the Red Fort cannot make him a part of the unlawful assembly” in the previous hearing.

Gupta said that there was no substance with the Prosecution to actually prove the Sidhu’s mens rea to commit the impugned acts.

Gupta highlighted how the right to a peaceful protest is a Fundamental Right enshrined in our constitution and Sidhu was exercising the same with attempting to “pacify the crowd” and not instigate it.

As per an order dated by February 26, 2021, CMM Gajendra Singh Nagar had directed the police to conduct an impartial investigation that would aid the case solving. This was done in response to Advocate Gupta moving an application in the Court that sought directions to the investigating agency to call, preserve and make part of the investigation the other records and material pertaining to the case.

Gupta also submitted, “I never urged people to go to the Red Fort. Nor did I call anyone to gather at the Red Fort. You have all the videos. Whereas there are videos of other people also asking to come at the Red Fort. They have considered my video but they must also consider videos of others too. I am not the main accused. Before I reached there, people had already broken the barricades. I was trying to pacify the crowd and help the police."

Lastly, it must be noted that another application was made by Sidhu that sought security in the premises of the jail, that was withdrawn after Gupta was enlightened about the fact that his client was already being kept in a separate cell.