Section 156(3) CrPC: Register FIR Within 24 Hrs On The Receipt Of Order Or Face Disciplinary And Penal Consequences: Calcutta HC To Police 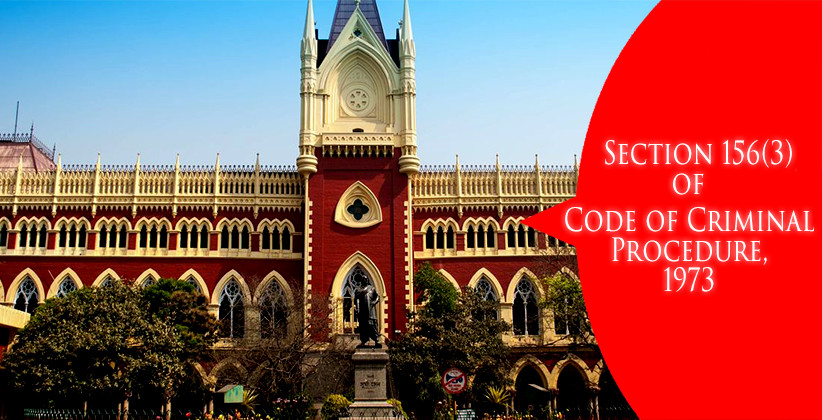 The Calcutta High Court on July 17, 2019, in the case of In Re: Abdul Khaleque has observed that the FIR should be promptly registered by the police under Section 156(3) of the Code of Criminal Procedure, 1973, once there are directions from Magistrate for same; failure to do so will attract disciplinary proceedings and also penal consequences.

"[W]here the judicial authority issues direction for registration of FIR under Section 156(3) of the Code of Criminal Procedure, requirement to hold a preliminary enquiry is obviated and it is the mandate of law that such FIR must be promptly registered. Failure to do so constitutes a constitutional tort arising out of breach of the fundamental right of access to justice for victims of crime and action ought to be taken against erring police officers…," said the Bench comprising of Justice Manojit Mandal and Justice Joymalya Bagchi.

The Bench was hearing an application for anticipatory bail under Section 438 of the Code of Criminal Procedure in a case under Section 4 of the Protection of Children from Sexual Offences Act, 2012.

On perusal of affidavit filed by the police officer who was Inspector-in-charge in the case, the court found that the order of the Magistrate under Section 156(3) of the Code of Criminal Procedure was dispatched to Chanchal Police Station on 13th January 2018. However, no steps were taken in the matter till 11th September 2018. The court found the explanation offered in the affidavit by the then Inspector-incharge, Chanchal Police Station for such inaction as hopelessly vague and nonspecific.

“The aforesaid state of affairs disclose culpable negligence on the part of the law enforcement agency in compliance with the lawful order passed by the Magistrate under Section 156(3) of the Code of Criminal Procedure for registration of FIR for investigation of crimes including sex offences as in the present case. It is relevant to mention that lawful orders passed by the judicial authority are required to be scrupulously enforced by the police in terms of the statutory duty engrafted under Section 23 of the Police Act. That apart, failure to register FIRs for sex crimes attracts penal consequences under Section 166A of the Indian Penal Code,” the court said.

The court placed reliance on Apex Court's decision in Lalita Kumari v. Government of Uttar Pradesh & Ors. reported in (2014) 2 SCC 1, wherein Constitution Bench of the Apex Court held that prompt registration of FIR is imperative for the following reasons:-

(a) It is the first step to "access to justice" for a victim.

(b) It upholds the "rule of law" inasmuch as the ordinary person brings forth the commission of a cognizable crime in the knowledge of the State.

(c) It also facilitates swift investigation and sometimes even prevention of the crime. In both cases, it only effectuates the regime of law.

(d) It leads to less manipulation in criminal cases and lessens incidents of "antedated" FIR or deliberately delayed FIR.

Directions issued by the court

The court directed the Director General of Police, State of West Bengal to ensure initiation of disciplinary proceeding against Sri Sukumar Mishra, the then Inspector-incharge, Chanchal Police Station and presently Circle Inspector, Sadar Balurghat, Dakshin Dinajpur and/or any other police officer who may be responsible for the aforesaid breach and to submit report with regard to the fate of such proceeding on the next date of hearing.

In order to ensure that such breaches of statutory duty do not occur in future and the constitutional obligation to 'uphold rule of law' by promptly registering FIRs pursuant to directions given by learned Magistrates under Section 156(3) of the Code of Criminal Procedure are effectively enforced, the court directed as follows:-

It directed the Principal Secretary (Home), Government of West Bengal and the Director General of Police to file compliance report of aforesaid directions on the next date of hearing.

The court granted conditional anticipatory bail to the applicant opining that custodial interrogation of the accused/petitioner may not be necessary in the facts of the present case whereas his movement requires to be restricted in order to instill confidence in the minds of the de-facto complainant and the victim.

It accordingly directed that in the event of arrest, the accused/petitioner, namely Abdul Khaleque, be released on bail upon furnishing a bond of Rs.10,000/- (Rupees Ten thousand only), with two sureties of like amount each, to the satisfaction of the arresting officer and also be subject to the conditions as laid down under Section 438(2) of the Code of Criminal Procedure, 1973 and on the further condition that he shall not enter the jurisdiction of Chanchal Police Station except for attending court proceedings and/or the investigation until further orders and shall provide the address where he shall presently reside while on bail to the Investigating Officer as well as the court and shall meet the Officer-in-charge of the concerned police station where he shall reside once in a week until further orders and shall appear before the court and pray for regular bail within four weeks from date.

The court fixed November 5, 2019, as date for submission of reports in the case.