Home Judiciary Registered Document is Presumed to be Genuine; Onus to Prove Otherwise is on Person Who Challenges it: Supreme Court [READ JUDGMENT]
Judiciary

Registered Document is Presumed to be Genuine; Onus to Prove Otherwise is on Person Who Challenges it: Supreme Court [READ JUDGMENT] 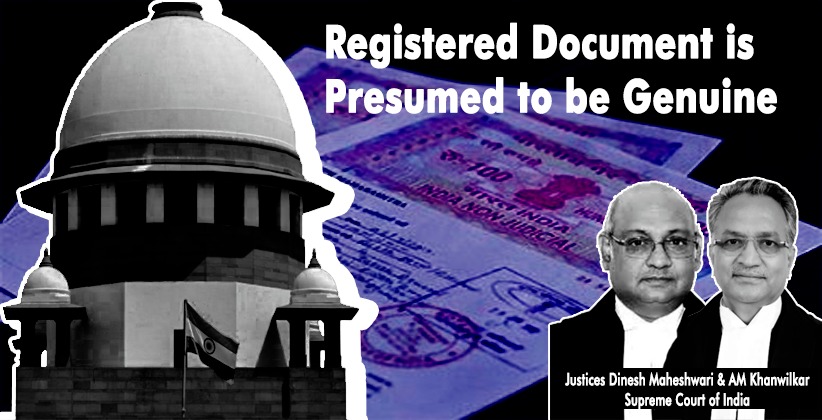 In A suit filed in the year 2001, the plaintiff's case was that the defendants sought her signatures on blank papers in the year 1990 under the guise of preparation and processing of documents for the purpose of getting the estate left behind by their father mutated in their names.

This suit was dismissed by the Trial Court and the First Appellate Court. The High Court then reversed the concurrent findings and decreed the suit.

In the appeal, the issue arose before the Apex Court was whether a General Power of Attorney and sale deeds purported to have been executed by he plaintiff in the year 1900 is a result of fraud and forgery.

Another issue, in this case, was whether the suits filed by the plaintiff were within limitation.

As to the title of the subsequent purchasers, since 1990 it has been proved, there is no reason to doubt that they are bonafide also the petitioners could not prove the existence of fraud.

Thus, the appeal was allowed by the apex court and the decree passed by the High Court is set aside.

The appeal was heard by the bench comprising Justices AM Khanwilkar and Dinesh Maheshwari.

Chief Justice and Judge of Kerala High Court Donate Rs. 25,000 Each for Treatment of Children with Rare Disease [READ ORDER]