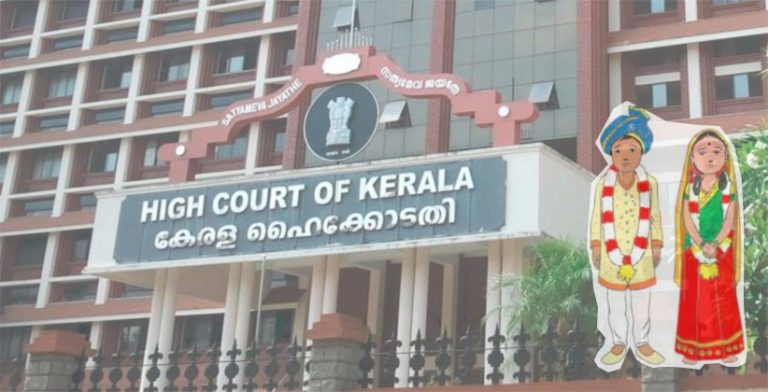 The Kerala High Court in a recent case has held that the registration of child marriage is compulsory under the Kerala Registration of Marriage (Common) Rules, 2008, as it would ensure that there is better transparency and adequate proof to penalise the offenders under the Prohibition of Child Marriage Act, 2006.

A Bench comprising of Chief Justice Hrishikesh Roy and Justice A.K. Jayasankaran Nambiar was hearing a batch of petitions filed by Punarjani Charitable Trust and several others seeking quashing of circulars issued by the Local Self Government Authorities of Kerala Government. Under the circulars it was clarified that there is no legal impediment in registering the Muslim marriages, where the male has not attained 21 years and the female has not attained 18 years, on the basis of the certificate of the religious authority, as per Rule 9(3) of the Kerala Registration of Marriage (Common) Rules, 2008.

The learned counsel appearing for the petitioners argued that by issuing such circulars, the Government of Kerala has encouraged solemnisation of child marriages, in contravention of the mandate of the Prohibition of Child Marriage Act, 2006, which was notified for its application in the State of Kerala. The Act was intended to prohibit solemnization of child marriage and punish those, who have acted in violation of the statutory enactments.

The Bench referred to a judgment passed by the Supreme Court in Seema v. Ashwani Kumar, where it was observed that in most cases non-registration of marriages largely affects the women and if the marriage is registered, it however provides evidence of the marriage having taken place and would provide a rebuttable presumption of the marriage.

The Bench noted that, consequent upon the decision in Seema v. Ashwani Kumar, the Kerala Registration of Marriages (Common) Rules, 2008, was notified mandating under Rule 6, compulsory registration of all marriages solemnized in the State except those, which were required to be registered under separate enactments.

Thus upholding the circulars issued by the Local Self Government Authorities of Kerala Government, the Bench observed that these circulars are intended to achieve the objective pointed out by the Supreme Court in Seema v. Ashwani Kumar. It also said that the role of the Marriage Registration Officer occurs only at the stage of solemnization of marriage and he has no role in preventing marriage, between under-aged couples.

Rejecting the arguments submitted by the petitioners, the Bench said that “We are unable to accept the argument advanced by the learned counsel that the circulars would fail the objectives of the Prohibition of Child Marriage Act. As a matter of fact, the registration of even the child marriages, in our perception, would ensure that there is better transparency and adequate proof to penalise the offenders under the Prohibition of Child Marriage Act."