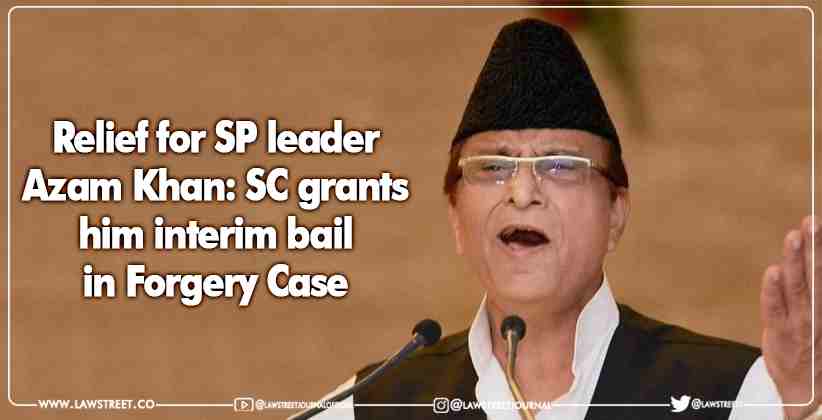 The exceptional powers of Article 142 of the Constitution were used by a three-judge bench of Justices L Nageswara Rao, BR Gavai, and AS Bopanna. "This is a fit case to exercise the powers under Article 142.", Justice Gavai stated in the order's main body.

Azam Khan asked for the quashing of the proceedings lodged under 420 and 120B of the IPC in his writ petition for bail. In addition, the appeal pleaded with the Supreme Court to direct the State of Uttar Pradesh to approach it before any further arrests of Khan. Other reliefs in the writ petition have not been addressed by the court.

When the Allahabad High Court took an unnecessary amount of time to decide on his bail application in another case, the bench expressed its unhappiness. On May 6, 2022, it issued the High Court an oral ultimatum to issue orders. Khan was later granted bail by the High Court, although he was not immediately released. He is being held in judicial custody until May 19, 2022, in connection with a separate case. The Apex Court had expressed concern about "the coincidence" that as and when Khan is enlarged in one case, a new FIR is registered against him.

He contended that the new FIR was an attempt to put Khan in jail indefinitely by senior advocate Mr. Kabil Sibal. As opposed to this, the Additional Solicitor General had contested the writ of habeas corpus, stating that Khan was the primary suspect, in accordance with the complaint. He asserted that he was the subject of charges for illegal land grabs as well as fraud.

Rampur Public School, Jauhar University Road, and Topkhana are all part of the same alleged land grab, according to the ASG. All three "Rampur Public School" schools managed by the Maulana Mohammad Ali Jauhar Trust are owned by Khan. He had claimed that the complainant had demanded a comprehensive examination of the registration and affiliation paperwork of all three schools by submitting an application to the Superintendent of Police.

Nearly 81 cases were filed against Azam Khan around the time of the 2019 Lok Sabha elections. One day earlier, on 18.03.2020, a FIR was lodged saying that a certificate for affiliation with Rampur Public School, Yateemkhana, had been submitted fraudulently. On December 4, 2021, the Allahabad High Court reserved its decision on Khan's bail application in the aforementioned case. Nominations for the 2022 Uttar Pradesh Legislative Assembly Election were filed by Khan from Sitapur Jail.

His request for interim bail in three remaining cases involving charges of corruption, cheating, forgery, criminal breach of public trust, criminal conspiracy, criminal defamation, evidence tampering and creating or promoting enmity, hatred or ill-will between classes was made to the Apex Court on 21.01.2022, due to the impending election campaign. On February 8, 2022, the Apex Court dismissed the plea, but allowed Khan the option of going to the court where he was being held to ask for an expedited resolution of his bail applications. The Allahabad High Court had reserved its decision on his bail application, which had been granted in the other two cases.

Because of this incomprehensible delay, Khan applied for interim bail to the Apex Court on April 23,2022. Once this had been established at Allahabad High Court, UP government lawyers filed motions asking for the records of any further developments that were critical to the bail case. The High Court reserved judgement on the bail application on May 5, and on May 10, it rendered its decision.

On May 6, 2022, the Rampur Police released a press release stating that Khan's name had surfaced during the investigation of another criminal case. On the same day that Khan was booked into Sitapur Jail, he was served with a custody warrant. Through video conferencing, he appeared before the Magistrate and was remanded to judicial custody until May 19, 2022.