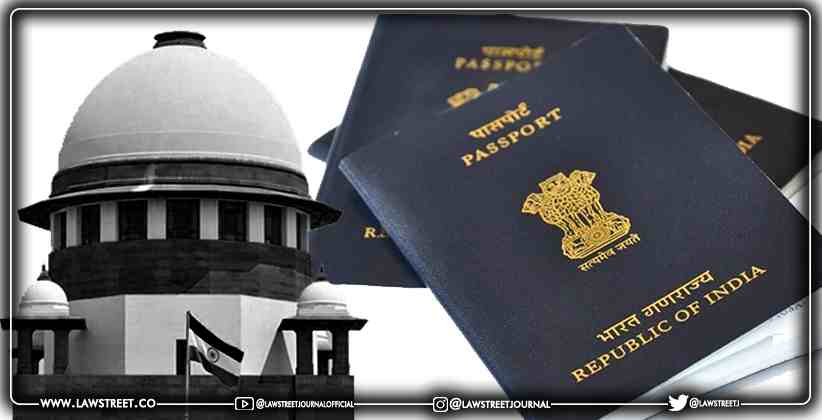 The Supreme Court observed that renewal of passport cannot be refused merely on the ground of pendency of criminal appeal.

The applicant was convicted for offences punishable under sections 120-B,420, 468, 471, 477 A of the Indian Penal Code read with Section 13 (2) read with Section 13 (1) of the Prevention of Corruption Act, 1988. He filed an appeal in the High Court which was dismissed but his sentence was reduced to a period of one year. The appeal against the High Court judgement is still pending before the Supreme Court.

The applicant filed an appeal for renewal of passport but was orally informed that it was not being done due to pendency of criminal appeal before the Apex Court. Therefore, he filed an interlocutory application approaching the Supreme Court to give directions to the CBI to give no objection for renewal of his passport which expired on 12.11.2017. the CBI opposed the plea stating that renewal of passport can be done only after he obtained permission from the concerned trial court. They referred to the clause (e) and (f) of Section 6.2 of the Passport Act, 1967 to contend that the passport authority has the power to refuse issuance of the passport in view of the pendency of the criminal appeal filed by him.

The clauses states that:

e) that the applicant has, at any time during the period of five years immediately preceding the date of his application, been convicted by a court in India for any offence involving moral turpitude and sentenced in respect thereof to imprisonment for not less than two years;

f) that proceedings in respect of an offence alleged to have been committed by the applicant are pending before a criminal court in India;

The bench of Justices L. Nageswara Rao and B.R Gavai whilst delivering the judgment observed that:

“The refusal of a passport can be only in case where an applicant is convicted during the period of 5 years immediately proceeding the date of application for an offence involving moral turpitude and sentence for imprisonment for not less than two years. Section 6.2 (f) relates to a situation where the applicant is facing trial in a criminal court. Admittedly, at present, the conviction of the appellant stands still the disposal of the criminal appeal. The sentence which he has to undergo is for a period of one year. The passport authority cannot refuse the renewal of the passport on the ground of pendency of the criminal appeal.”