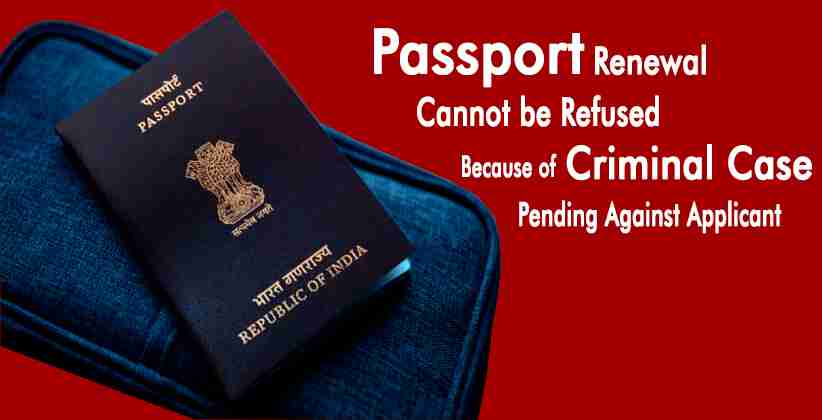 The Karnataka High Court recently held that while passport authorities can refuse issuance of a fresh passport to a person against whom a criminal case is pending in India, the same rule would not apply for renewal of passport.

While interpreting Section 6(2)(f) of the Passport Act, the Bench of Justice Hemant Chandangoudar held,

"A reading of Section 6(2)(f) of the Passport Act indicates that the passport authority shall refuse to issue a passport or travel document for visiting any foreign country if a criminal proceeding is pending against the applicant in India. However, the said provision does not provide for refusing to issue a passport for a person who intends to travel back to India. Hence, reading of this provision clearly indicates that it is applicable only for issuing a fresh passport and not for renewal of passport."

The petitioner had approached the court seeking directions to the authorities to allow his application dated January 22 for the renewal of his passport. He stated that in 2006, he relocated to the USA and was residing there along with his family on an H1B visa.

On January 1, 2020, he had applied for renewal of his passport through his travel agency before the Indian Consulate in New York. Later on, the petitioner sent an email to the Consulate informing the authorities that his passport was due to expire shortly, and followed it up with several requests.

On July 17, the Regional Passport Office informed him that it had received a letter from the Central Bureau of Investigation (CBI) stating that a criminal case was pending against him.

Since there was no response by the Regional Passport Office, the petitioner approached the High Court. Counsel appearing for the petitioner contended that the alleged criminal case was not a ground for refusal to the renewal of his passport and that he was not even aware of the same.

It was further contended that the petitioner does not need to obtain an Emergency Certificate under the Passport Act, 1967 read with the Passport Rules, 1980, since no Lookout Circular or Red Corner Notice was issued against him.

On the other hand, Assistant Solicitor General C Shashikanth argued that written permission of the jurisdictional Magistrate is required for renewal of the passport, as provided in a 1993 notification issued by the Union Ministry of External Affairs.

It was also argued that the petitioner cannot insist on the renewal of his passport to travel to India and that he could obtain an Emergency Certificate for the same.

Relying on precedents, the Court held, "The Apex Court in the case of Satwant Singh Sawhney supra, has held that under Article 21 of the Constitution of India, no person can be deprived of his right to travel except according to the procedure established by law. Hence, Petitioner’s right to travel cannot be curtailed on the pretext that a criminal case is pending against him by refusing to renew his passport."

The Court also took into account the fact that there was no document to establish that the petitioner was served with a summons issued by the jurisdictional Magistrate or any notice by the authorities informing him about the pendency of the criminal case against him.

The writ petition was thus allowed, with the Court directing the authorities to renew the petitioner's passport for nine months, subject to his depositing a bank guarantee for a sum of Rs. 5 lakhs.