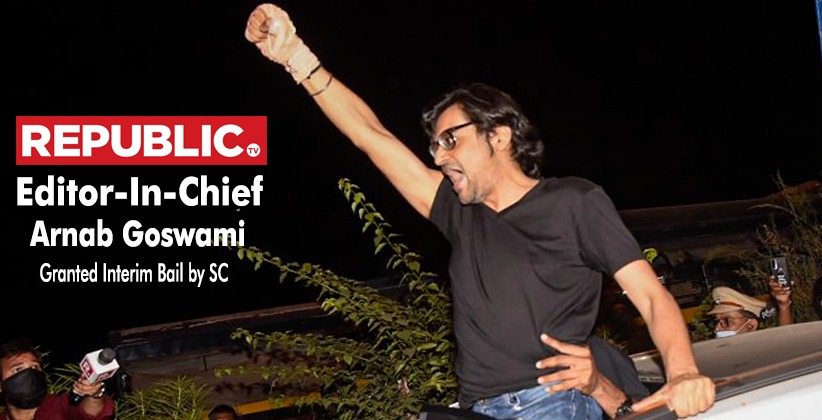 The Supreme Court has ordered for the release of Republic TV's editor-in-chief Arnab Goswami on interim bail. The bench of Justices Chandrachud and Indira Banerjee while hearing the plea challenging the Bombay High Court order passed the above judgment. The apex court contended that High Courts were not doing enough in matters where personal liberty is denied.

Justice D Y Chandrachud said "If this court were not to interfere today, we are travelling on a path of destruction of personal liberty undeniably. Is this is what our state governments will do to those who have to be nailed...?"

He further added “Don’t watch the channel of you don’t like... Left to myself I will not watch... If state government target individuals in this manner, let’s send out a message that Supreme Court is there"

Justice Chandrachud asked senior advocate Kapil Sibal, appearing for Maharashtra, if there was any active encouragement or instigation in the case to constitute an offence of abetment to suicide.

Appearing before the court for Arnab Goswami’s counsel and senior advocate Harish Salve said that the Maharashtra Police was seeking custodial interrogation to teach him (Arnab) a lesson.

Harish Salve also said that the case against Goswami did not stand the test of basic ingredients required to establish an offence of abetment to suicide under Section 306 of IPC.

He argued that Arnab Goswami was arrested on the basis of a three-year-old FIR.

He also alleged that the power to re-investigate is being wrongly used by the Maharashtra government.

The bench expressed their concern over state governments targeting “individuals on the basis of ideology, difference of opinion." The top court observed that Indian democracy is “extraordinarily resilient” and the Maharashtra government must ignore it.

The bench, headed by Justice Chandrachud, granted Arnab Goswami and two other accused Feroz Shaikh and Nitesh Sarda interim bail on a bond of Rs 50,000.

The bench directed the Commissioner of Police to ensure the order is followed immediately.