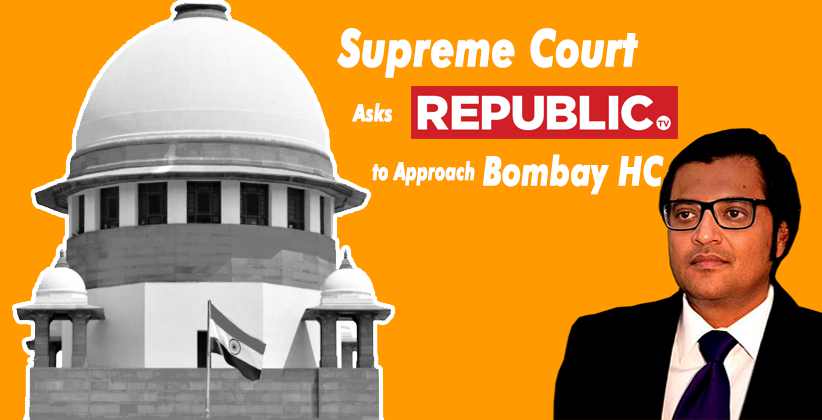 The Supreme Court on Thursday (October 15, 2020) refused to entertain a plea by Republic TV's Editor-in-chief Arnab Goswami and his company challenging the investigation in the TRP scam and asked him to approach the Bombay High Court.

A bench comprising Justice D Y Chandrachud, Indu Malhotra, and Indira Banerjee said the high court has been working throughout the COVID-19 pandemic and the media group should approach it.

Senior advocate Harish Salve appeared for the media house and expressed apprehension about the ongoing probe.

The court said, “Your client has an office at Worli (in Mumbai)? You may go to the Bombay HC… Entertaining a petition like this without HC hearing the matter sends a message also. The HC is working throughout the pandemic.”

Salve then withdrew the petition with liberty to approach the high court.

In the TRP scam, the Mumbai Police registered a case and summoned the chief financial officer of Republic TV, S Sundaram, for investigation. Mumbai Police Commissioner Param Bir Singh alleged that the TRP was abused by three networks, including Republic TV.

When BARC, an organization that calculates TRP, lodged a complaint in this respect through Hansa Research Group Pvt Ltd, the police said, the racket came to light.

Mumbai Police had previously filed an affidavit with the highest court requesting the dismissal of the Republic Media group's plea alleging that an investigation into an alleged crime can not be called upon as a basis for infringement of Article 19(1)(a).

It further stated that “Article 19(1)(a) cannot be invoked by the petitioners to sidestep, thwart and prevent any investigation by the competent investigating agency into alleged fudging of TRP ratings. The right under Article 19(1)(a) is not a shield that can be used against any a commission of a crime under the extant criminal law of the land,” it said.

The police submitted that the allegations contained in the impugned FIR registered by it make out any offense cannot be decided at this stage.

The police said, "The investigation progress is still going on. Under Article 32 of the Constitution, there is no extraordinary situation that warrants any intervention by this Court.”