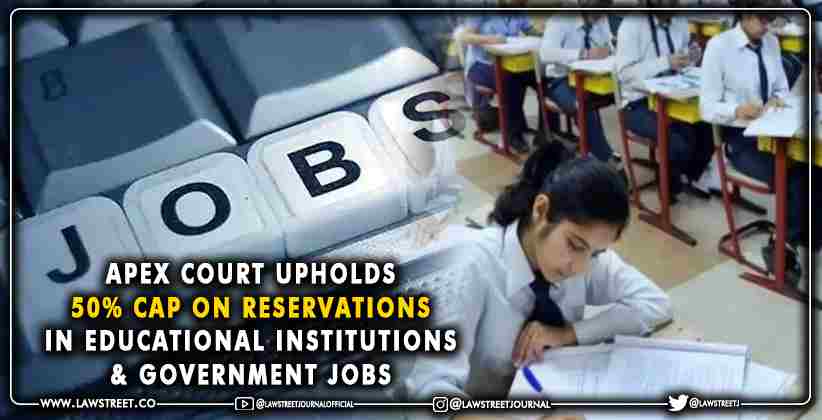 On May 5th 2021,  the Apex court delivered a landmark verdict that may go a long way in keeping a check on the ever-augmenting appetite of a majority of political class to appease some sections of the society or the ‘vote banks’ for political gains. In a landmark judgement, a five judge Constitutional Bench of Supreme court upheld the 50% cap on reservations in educational institutions and government jobs and scrapped the validity of Maharashtra’s “unsustainable” 2018 Maratha quota that breached the inviolable 50% limit.

The Apex court denied the reexamination of its 1992 judgement, which put a bar of 50% on quota after turning down the plea made by many states that the ceiling be scrapped and they be allowed to grant reservation in excess to maximum limit as a consequence of “modified social dynamics”. The essence of the 1992 Indra Sawhney judgement by nine judge Constitutional Bench was that the 50% ceiling, which the Times of India editorial teamed as Lakshman Rekha is sacrosanct unless an extraordinary case is made out. This judgement may have a far-reaching result on similar decisions taken by many other state governments besides on the reservation to economically weaker sections (EWS), which additionally breaches the 50% rule.

Important elements of the judgement

The constitution bench Chaired by justices Mr. Ashok Bhushan, Mr. L. Nageswara Rao, Mr., S. Abdul Nazeer, Mr. Hemant Gupta and Mr. S. Ravindra Bhat, unanimously agreed that the cap on reservation in accordance with the 1992 “which has stood the test of the time” was mounted to realize precept of equality and with an object to strike a stability. Contradicting this limit will create a society based on cast rule it said adding that the share of 50% has been arrived at on the precept of reason ability and achieves equality as enshrined by article 14 of which articles 15 and 16 are aspects.

The Supreme Court aimed a severe blow to the authority of the state governments in identifying backward classes by ruling that after the 2018 amendment in the constitution, only the central government could notify socially an educationally backward class.  The interpretation of the 102nd Constitutional amendment may impinge the power of states to provide reservation benefits after separately identifying backward classes especially in this time when several other classes like Jats and Gujjars are demanding individual quotas.

This pivotal ruling of Supreme Court was passed in 2018, for The Maratha law, after months of violent agitation and intense lobbying by the influential community which makes up 32% of the state population. This law received support from all the major political parties and the High Court upheld the law but trimmed the quantum of quota promoting several groups to approach the apex court. This law was based on a state backward Commission report and the window of extraordinary situations cited in the 1992 Indra Sawhney case. It provided that 16% of reservation in jobs and educational institutions to Marathas takes up the cast-based quota to a 68% height.

Most of the experts have named this judgement of the Supreme Court as a welcome development. The reason of not breaking this limit is that this cap Reflect an attempt to balance the states prerogative to try to correct historical injustices suffered by some groups with the right to equal opportunity for all citizens.

Besides the constitutional dimensions, this issue also has political and economic dimensions to it. The state of Maharashtra is not alone in trying to attract the so-called vote banks by dangling the carrot of quota and indulging in populist rhetoric. Similar scenarios have been seen in many other states like Patel’s in Gujarat and Jat's in Haryana. It has been also viewed that some of these communities are now no longer in need of a special quota but are still proactively reminding reservations.

At this time a lot of states are reserving jobs for locals but this increase in reservation will in the long term only negatively impact their own growth and prospects.

In this landmark judgement, the Supreme Court has struck the right note when it advised that the states ought to approach other measures including providing educational facilities to the members of backward class free of cost, giving concession in fee, providing opportunities for skill development to enable the candidates from backward classes to be self-reliant.