Home Judiciary Bombay HC States Giving Money to Another for Drugs Consumption Does Not Amount to “Financing” or “Harboring” Under Section 27 A of the NDPS Act, 1985 [READ ORDER]
Judiciary 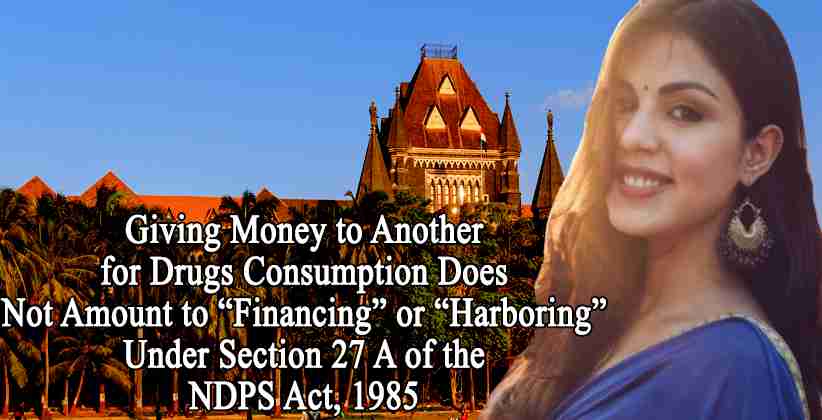 While granting bail to Bollywood actress, Rhea Chakraborty, Bombay HC also interpreted the scope and meaning of Section 27 A of the Narcotics Drugs and Psychotropic Substances (NDPS) Act, 1985. This deals with offence of “financing illicit traffic and harboring offenders".

In this respect, Hon’ble Justice Sarang V Kotwal stated that when one person gives money to another for drug consumption this wouldn’t result in ‘financing’ or ‘harboring’ and offender under Section 27 A. in the case against Rhea Chakraborty relating to the SSR case, the NCB had contended the application of Section 27 A, alleging that the drugs purchased by her boyfriend SSR were paid by her. ASG Anil Singh, appearing for the NCB had also stated that since Chakraborty concealed the consumption of drugs by SSR, she was harboring an offender.

After analyzing the interpretation of Section 27 A, the arguments of the NCB were rejected. The Bench stated, “The activities mentioned in Section 2(viiia)(iii) and Section 8(c) refer to sale, purchase, export, import, etc... All these activities involve monetary transactions. For every sale or purchase, there can be a use of money.

But that will not mean that either of the parties has "financed" the transaction. Such sale and purchase are separately prohibited and made punishable under Section 8(c) read with Section 20 and other similar Sections. Therefore, "financing" is something more than just paying for the purchase and other activities involving contraband as defined under Section 8(c) Contravention of that Section and indulging in activities mentioned in Sections 20, 21, 22, and 23 incur punishment depending on the quantity of the contraband”.

The court also noted the “statement of Objects and Reasons” for the incorporation of Section 27 A to ensure harmonious interpretation of the provision. In this regard, the court stated, “The Statement of Objects and Reasons of the 1989 Amendment mentions that India was facing a problem of transit traffic in illicit drugs. The spill-over from such traffic was causing problems of abuse and addiction. Therefore, the need was felt to amend the Law to further strengthen it.”

The court also observed that the term “financing” is not clearly defined under the Act. Thus, the interpretation of this word in the context of the object could be sought to be achieved by Section 27 A of the NDPS Act, 1985. in this regard, the court observed, “if Section 27A is read in its entirety, it indicates that financing is in respect of illicit traffic through which the financer expects monetary or other returns”.

Thus, if the applicant spent money to procure drugs for SSR, it wouldn’t prove that she financed illicit drugs.