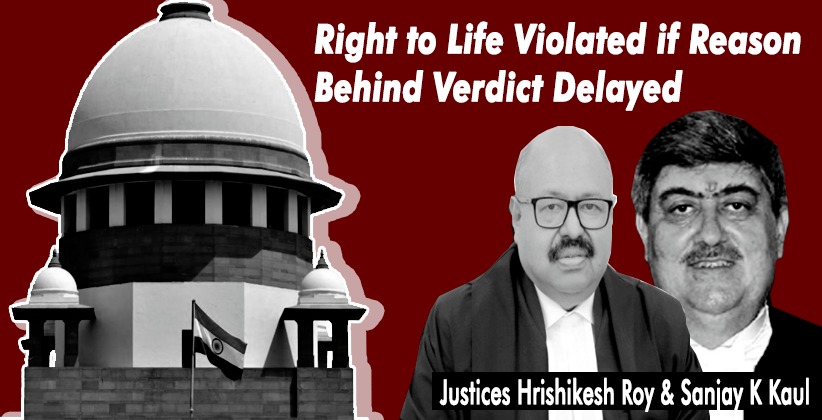 On Jan 21, 2020, The Aurangabad bench of the High Court of Bombay had pronounced a cryptic judgment in a case, saying “reasons will follow”, which meant that the detailed judgment would be given later. An appeal was filed by a litigant in March against the High Court judgment. This judgment was passed within the time limit of ninety days. However, the listing of plea could not be done as the litigant had not provided the detailed judgment giving reasons behind the verdict.

The plea got listed in the Supreme Court at last. This was heard by a bench of two judges: Justice Sanjay K Kaul and Justice Hrishikesh Roy. The appellant informed the bench that the reasoned order had not followed, even though nine months had passed since the cryptic order deciding his case.

An explanation was asked by the Supreme Court from the registrar of the Aurangabad bench of the High Court. Justice Kaul said, “We must note with regret that the counsel extended through various judicial pronouncements, including the one referred to aforesaid, appear to have been ignored, more importantly where oral orders are pronounced. In case of such orders, it is expected that they are either dictated in the court or at least must follow immediately thereafter, to facilitate any aggrieved party to seek redressal from the higher court.”

Terming delays in giving reasons behind Judgments as a violation of the right to life of a litigant, the bench said that the problem gets aggravated when the operative portion is made available early & the reasons follow much later. It cannot be countenanced that between the date of the operative portion of the order & the reasons disclosed, there is a hiatus period of nine months.

The High Court order was set aside by the Apex Court order & it asked the Aurangabad bench to hear the case afresh while giving protection against coercive action from Maharashtra Govt to the litigant.

In the judgment of 2001 of the Supreme Court in the Anil Rai case, the Supreme Court had said that the pronouncement of a judgment must not exceed two months after a bench reserves verdict. It had said that if the judgment was not given even after the expiry of three months, then the parties could move the chief justice concerned for a direction for early pronouncement of judgment. If no judgment was given even after six months of reserving the verdict, the parties concerned could move the chief justice for a fresh hearing in the case.