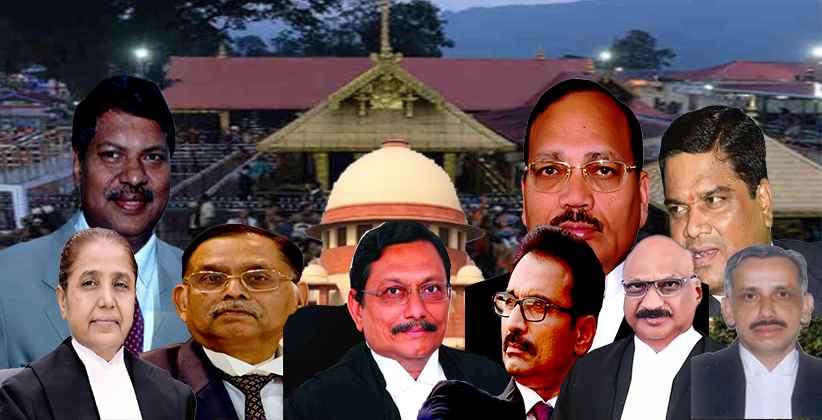 A nine-judges' bench of the Supreme Court of India is scheduled to hear the Sabarimala Case today (February 3, 2020) to frame issues regarding discrimination against women in various religious places and in countless religious traditions. Issues to be considered include entry of women into mosques, the practice of female genital mutilation in the Dawoodi Bohra Muslim community and barring of Parsi women, married to non-Parsi men, in the holy fire place at an agiary.

The court had, on January 13, 2020 asked four senior lawyers to convene a meeting to decide the issues to be deliberated by it, in the matter. However, after the lawyers failed to arrive at a consensus, CJI Bobde had said to Senior Advocates V. Giri, Arvind Datar, and Indira Jaising that "we are disappointed that you have not arrived at a consensus.”

The court had then decided that the bench would work on it over the weekend and hold a hearing on February 3. The nine judges, the CJI said, would then meet and finalise the issues after taking into accord the inputs that they receive in the February 3 hearing.

The Supreme court in its 2018 judgment struck down Rule 3 (b) of the the Kerala Hindu Places of Public Worship (Authorisation of Entry) Rules, 1965, which was the legal basis for barring entry of women between the ages of 10 and 50 years intothe Sabarimala temple.

Following the Supreme Court’s decision, at least 60 review petitions were filed in the Supreme Court challenging the September 2018 verdict. A five-judge bench on November 14, 2019 heard the Sabarimala review petitions and framed seven questions to be answered by the larger bench. This included questions on interplay between the freedom of religion under Articles 25 and 26 of the Constitution of India, 1949 and other fundamental rights, particularly right to equality under Article 14, the scope of expression ‘morality’ or ‘constitutional morality’ and the extent to which the court can enquire into whether a particular practice is an integral part of the religion or religious denomination. However, when the 9-judge constitution bench assembled for hearing on January 13, 2020 Chief Justice Bobde asked the parties to reframe the questions that it should consider. While the five-judge bench unanimously agreed to refer religious issues to a larger bench, it gave a 3:2 split verdict on petitions seeking a review of the ApexCourt’s September 2018 decision, allowing women of all ages to enter the Sabarimala shrine in Kerala.

A majority verdict by the then Chief Justice Ranjan Gogoi and Justices A M Khanwilkar and Indu Malhotra decided to keep the pleas seeking a review of its decision regarding entry of women into the shrine pending and said restrictions on women at religious places were not limited to Sabarimala alone and were prevalent in other religions as well.

The minority verdict by justices R F Nariman and D Y Chandrachud gave a dissenting view by dismissing all the review pleas and directing compliance of its September 28 decision. The split decision came on 65 petitions — 56 review pleas, four fresh writ petitions and five transfer pleas — which were filed after the ApexCourt's verdict of September 28, 2018 triggered violent protests in Kerala. By a 4:1 majority verdict, the ApexCourt had lifted the ban that prevented women and girls between the age of 10 and 50 years from entering the famous Ayyappa shrine in Sabarimala and held that the centuries-old Hindu religious practice was illegal and unconstitutional.

The review petitions will be decided after the nine-judge bench answers the legal questions referred to it.