Home Judiciary Can Samajwadi Party be deregistered on failing to provide info about criminal cases of its candidates? [Read PIL]
Judiciary 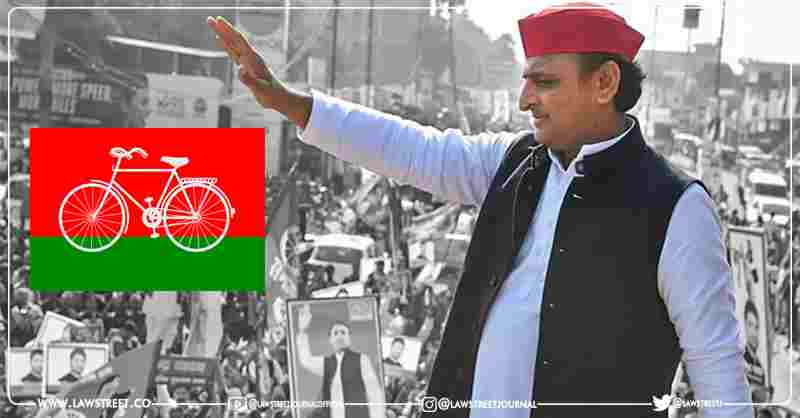 On Tuesday, the Supreme Court decided to hear a petition asking the Election Commission of India (ECI) to deregister political parties that fail to provide information about criminal cases concerning election candidates, as well as the reasons for their selection.

The petition was presented before a bench led by Chief Justice of India NV Ramana for an early hearing. The PIL is filed by Advocate Ashwini Upadhyay, who stated before the Bench that the nomination process has begun and that political parties are violating the two judgments of the court.

CJI Ramana questioned, "Is it possible to prevent those who are facing charges from submitting nominations? We'll see what you've addressed." In the spirit of the supreme court order, the petition has asked ECI to take measures to ensure that every political party discloses the information of each candidate's criminal charges, as well as the grounds for such selection, on the Home Page of its official website. The appeal has asked the ECI to de-register the political party that has fielded Nahid Hasan from Kairana for the Uttar Pradesh Assembly elections and has not revealed his criminal records online, claiming that the Samajwadi Party has violated the Supreme Court's orders. It also asked the SCI to order the ECI to ensure that every political party justifies why it selected a candidate with criminal records over someone without such criminal records within 48 hours.

The counsel for the petitioner, Upadhyay further requested that the ECI ensure that every political party discloses criminal charges within 48 hours in electronic, print, and social media and that a contempt case be brought against the President whose party disobeys the Supreme Court's orders. It added that the Samajwadi Party, a registered and established political party, fielded known gangster Nahid Hasan from Kairana on January 13, 2022, but failed to disclose his criminal records or the basis for his selection within 48 hours, as required by the instruction supreme court.

"Nahid Hasan is the first candidate to register a nomination in the first round of the Uttar Pradesh Assembly Elections, despite being detained under the Gangster Act, which was imposed on him roughly 11 months ago. Shamli Police invoked the Gangster Act on Nahid Hasan, a two-time MLA from Kairana, on February 13, 2021. He is the mastermind behind the Hindu exodus from Kairana and has many criminal cases against him. Many criminal proceedings have been filed against him, including fraud and extortion, and he has been branded a fugitive by the Special MLA-MP Court' It is stated in the plea.

Even well-known political parties are providing tickets to notorious criminals, according to the report, making it impossible for citizens to vote freely and fairly, even though it is a fundamental right under Article 19. The consequences of allowing criminals to stand for election and become lawmakers are seriously destructive to democracy and secularism because, during the electoral process, they not only use huge amounts of illegal money to sway the outcome, but they also intimidate voters and rival candidates, according to the plea.

"Once they gain access to governance as legislators, they interfere with, and influence, the functioning of public administration in the best interest of themselves and their organisation by corrupting government officers and, where that fails, by using their contacts with Ministers to threaten transfer and initiation of disciplinary proceedings," the report continued. Some become Ministers, adding to the problem. It further stated in the plea that the "Legislators with criminal records try to obstruct the administration of justice by all means necessary to keep proceedings against them from being completed and, if feasible, to secure acquittals. Long delays in the resolution of proceedings against sitting MPs and MLAs, as well as low conviction rates, attest to their power "

Political parties were required to disclose the whole criminal past of their candidates for Assembly and Lok Sabha elections, as well as the reasons that compelled them to field alleged criminals over respectable individuals, in Supreme Court judgements issued in 2018 and 2020.

The information should be published in a local and national newspaper, including on the social media accounts of the parties. It must be disclosed within 48 hours of the candidates' selection or less than two weeks before the first due date for filing nominations, whichever comes first.

The nature of a candidate's criminal records must be detailed, including the nature of the offences, allegations brought against him, the court involved, case number, and so on.