Home Judiciary “Bar can always point out an issue with the bench. But the language needs to be looked at”- SC Justice Kaul while hearing Adv. Oza’s Petition against Contempt Proceedings
Judiciary 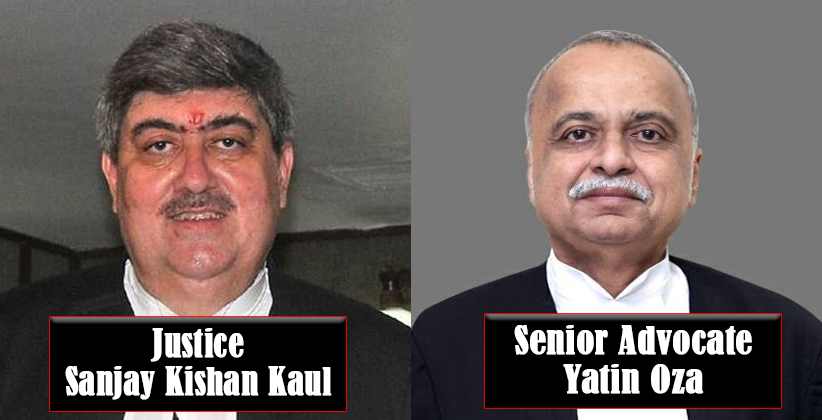 The Supreme Court recently heard the petition filed by Senior Advocate Yatin Oza, challenging the Gujarat High Court’s decision to withdraw his seniority designation. In the said matter, Senior Advocate had admitted tendering an unconditional apology to the HC for the remarks against it. He said that the Court is in the highest regard and it was never an intent to scandalize the Court whatsoever. "I seek forgiveness. I offer my unconditional apology. I did so before the Full bench in Gujarat HC also. In my career, I have never done something like this. I became a Senior at 44", he added.

The defending Counsel Arvind Datar submitted that “All statements were made in charged up atmosphere when a lawyer had to become a Swiggy delivery boy.” The Supreme Court bench headed by Justice SK Kaul held that it is indeed a difficult time for everyone, the Gujarat High Court has its own heritage and bar can always point out any issue to the bench but the language needs to be looked at and the difference of opinions can be conveyed in a better language. Justice Kaul also stated that "The kind of imputations you made; I don't agree with anything that. If seniors like you begin making such imputations, what about the Juniors who enter the profession?”

The decision to withdraw the Senior Advocate designation Oza was taken last month after the Advocate during a live conference on Facebook made critical remarks against the HC Registry which was attended by various journalists. He alleged that the HC registry was involved in corrupt practices, prejudice against poor and not-so-powerful classes.

This act was taken into the cognizance and a contempt proceeding against Sr. Advocate Oza was initiated. The HC observed the allegations baseless, unverified, and questioning the credibility of the High Court Administration.

In his plea, Advocate Oza has sought that the full court decision to withdraw his designation be set aside, and Rule 26 of the HC Rules be declared as ultra vires. The plea also states that "there has never been a case of divesting the designation for criticizing the Registry of the High Court. The same amounts to a chilling effect on free speech.”

The bench while accepting the unconditional apology said that Sr. Advocate shall submit the same before the full court in Gujarat HC. “We have also put to the Petitioner that — as a leader of the bar and a senior, his responsibility is greater than others", the bench noted in the Order.