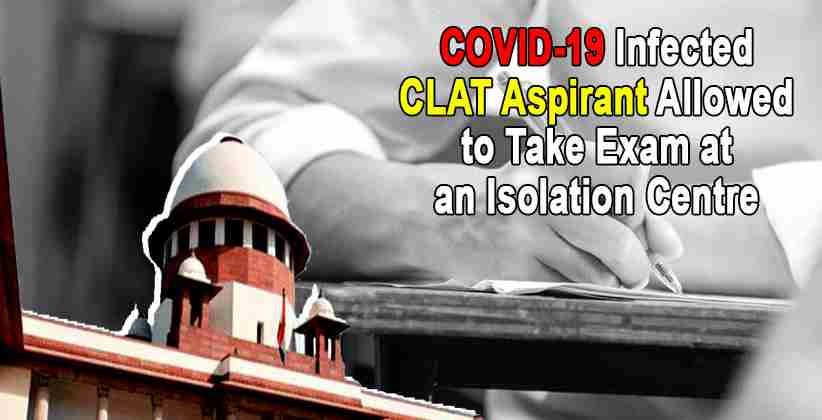 Hours before the scheduled start of Common Law Admission Test (CLAT)-2020 the Supreme Court on Monday allowed a COVID-19 positive aspirant to take the entrance test in a separate isolation room. The plea was filed by a COVID positive CLAT Aspirant, Mr. Deepansh Tripathi.

A bench headed by Justice Ashok Bhushan said, “In the facts of the present case, we are of the view that the student Deepansh Tripathi should be permitted to take his CLAT examination on September 28, 2020, in a separate isolation room to be provided by his Centre Superintendent”.

The bench also comprising Justices R Subhash Reddy and MR Shah said that the student shall ensure that a downloaded copy of this order should be presented before his Centre Superintendent as early as possible by any other non-symptomatic person. They made it clear that only the aspirant who had approached the Court vide the said urgent application shall be permitted to avail the facility and take the exam.

On such order being produced, the Centre Superintendent shall provide a separate room for the applicant to appear in the examination. The applicant shall enter into the center after other candidates take entry and shall first leave the examination center, it said.

There is very little time. We'll direct that you be allowed to take the exam," said Justice Bhushan while adding that the applicants must strive to serve the Consortium before 12 pm on Monday so that sufficient arrangements could be made.

Advocate Garima Parshad and Sumit Chandra appeared for the applicants. Chandra told the Court that there were not just 1-2 Covid19 infected aspirants who were aspiring to take the CLAT Exam but a couple of others and urged the Court to pass a general order for their benefit as well.

However, the Court was not inclined to pass a general order, stating that there was a paucity of time and the exam had to be conducted.

The Applicant sought clarification on the judgment [Rakesh Kumar Agarwalla and Anr. v. National Law School of India University, Bengaluru & Ors.] passed by the Supreme Court on 21 September 2020 and order of the CLAT Consortium in regard to denial to appear in CLAT exams to aspirants suffering from Covid-19 by not providing isolation rooms at the exam centers for COVID-19 positive aspirants, as promised earlier. (Admit cards have been issued with a provision that isolation rooms/centers will be provided to COVID positive students.)

As per the latest order of the CLAT Consortium, the candidates who have tested positive for COVID-19 and are under medical surveillance will not be permitted to take the CLAT 2020 examination scheduled to be held on 28 September 2020.

The student in his application said, "The sudden change in the stand of the Consortium of National Law Universities has deprived the applicant of his fundamental right under Article 14 of the Constitution of India to be treated as an equal and be given an opportunity to appear in the examination on September 28, 2020, which otherwise he was well entitled to like any other student.

As reported, The applicant has relied on the statement by the Vice-Chancellor of NLSIU, Bangalore, Mr. Sudhir Krishnaswamy on July 9, 2020, where he assured that:

the health and safety protocols that will be followed at the test centers will be of 'highest standard'. He has also informed that the Consortium has classified all centers into 'general testing rooms' and isolation rooms'."