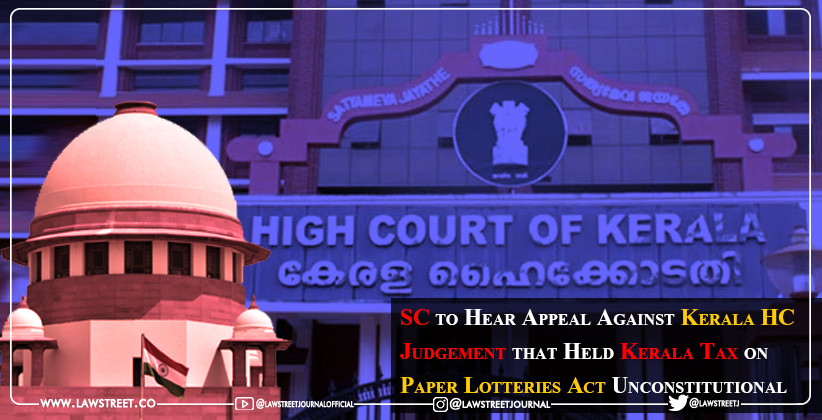 Special leave has been granted by the Supreme Court in the Special leave Petition that was filed by the state of Kerala against the judgement of Kerala High Court. This judgement held Kerala Tax on the Kerala Paper Lotteries Act, 2005 unconstitutional.

The judgement was stayed to the extent to the direction with regard to the refund of the amount already deposited by the Bench which comprised Justices DY Chandrachud and MR Shah.

The tax of the state of Kerala was held unconstitutional by the Kerala High Court on the ground that it lacked legislative competence to impose the same on the lotteries organised by the state, deriving its power from Entry 62 of List II of the Constitution.

On the other hand, the main contention of the state was, the judgements that kerala High Court went on to refer (those of the Karnataka & Bombay High Court) are under challenge before the Supreme Court. Along with this, the Supreme Court judgement of Skill Loto Solutions Pvt Ltd v Union of India that had upheld the levy of Goods & Services tax (GST) on lotteries, betting and gambling was also relied on by the state.

While granting the relief the bench had that there shall be an interim order by which the judgement of the High Court to the extent of the direction with regard to refund of the amount already deposited shall remain stayed.

The Division Bench of the High Court lastly observed:

“The activity of conduct of the lottery or the measure upon which tax is sought to be levied, cannot be said to have any direct nexus with the sale of tickets taking place within the State of Kerala. Hence the contention that the Act is intended to introduce an indirect taxation on the sale of lottery tickets, the same is prohibited under law. If it is something prohibited under law, the same cannot be done through an indirect method. If it is tax on other activity of organising and conducting of the lottery, then it becomes extra territorial. Hence, considering the provisions of the charging section and also considering the territorial application and further considering the law remaining settled prohibiting taxation on the sale of lottery tickets we are inclined to sustain the challenge made against the impugned legislature on the points urged as above.”