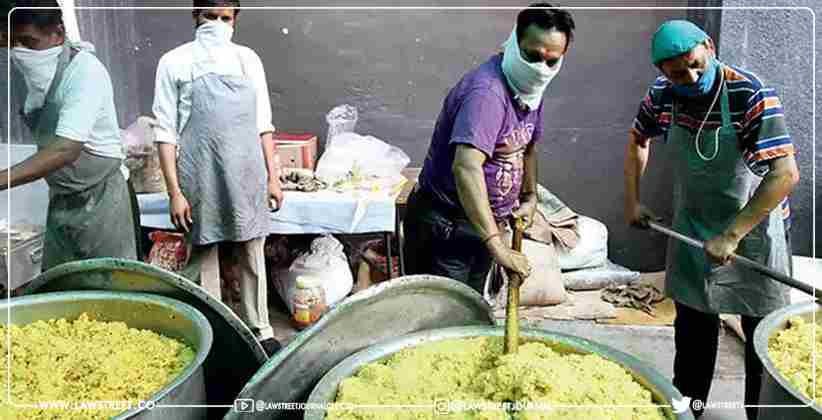 SC had earlier asked Centre to frame a pan-India policy on community kitchens, after taking view of different State Govts.

Adv Ashima Mandla: My limited request would be, if your Lordships could constitute an expert committee.

CJI: They are questioning the basis of what you are saying regarding starvation deaths.

CJI: can we understand there’s no starvation deaths in the country?

AG: There was a newspaper report about a child who died and it was found it was due to starvation. There was that one case.

AG: Govt’s stand is they are spending huge amount of money.

CJI: we are not saying that Government isn’t spending money.

CJI: The National Family health survey report the petitioner has filed, published by GOI. The cause of death statistics says that communicable paternal, maternal & malnutrition statistics is 25.7 % for male & 30% for female.

CJI: This Report indicates malnutrition is also a cause of death. Of course this is an old report. Why don’t you place before us, if there’s any survey report by GOI indicating what’s the position, if there’s any starvation deaths or not.

CJI: Mr Attorney, pls understand, we are not going to frame a scheme today itself or direct you to form a scheme. Let GOI give us some data about starvation deaths, latest information. Ask your officers to furnish that information.

AG: I will do that, the affidavit today states no States have reported starvation deaths. Please see stand of the States

CJI: Stand of states is government will provide money, and we will fulfill. States like delhi, Jharkhand, MP etc have said they are running kitchens but they are asking for money. Other states have said they’re not interested in scheme, they’ll implement if GOI gives money.

CJI: We are saying why don’t you think of some model scheme. We made it clear that we cant make universal straight jacket scheme, it depends about many factors. You can make a model scheme & leave it to states, if they want to implement, they will.

CJI: Some states are saying, You allocate 2-3% of that to the scheme.

AG submits that Panchayats may deal with the issue more efficiently

Bench: We are saying, GOI shouldn’t take this as adversarial litigation. You must have a practical approach, you can find out a way.

AG: States have to find out what the problem is, how infrastructure will have to be put up, the Panchayats can determine that.

CJI: As Govt of India, if you can frame a model scheme. I am not asking you to say how many kitchens etc that the local authorities will do. Your officers can do that.

Justice Kohli: Why is it that Central Govt is relying on 2015-2016 report for starvation deaths. Are you saying there’s no starvation deaths in the country except for 1? Can we depend on that statement?

CJI: This is the only latest affidavit.

J Kohli: let states collate and give it to you, you can file it.

Adv Mandla: Starvation deaths are only found if there’s an autopsy. National health family survey 2019-2020, its clear that for first time there’s been a reverse trend, malnutrition is at an all time high.

Adv Mandla: Our limited prayer is, we indicated a financial model which they outright rejected. If court could consider appointing an expert committee, a scheme can be formulated

AG: Malnutrition exists is not disputed by us, community kitchens have to be there isn’t disputed, issue is of finances.

CJI: What we are saying is, whatever money and scheme you are giving, allocate something to states, they will take care.

AG: Then we can make a scheme with this 2% additional foodgrains will be made available to states. Let states file an affidavit. So its seen if this 2% is acceptable to all states

Bench: you’ll have to do it internally, the court can’t do that. States have already given suggestions

CJI: We have nothing against you, Central Govt has to understand one thing. See this, it says Karnataka is implementing so many scheme. Haryana said there are migrant workers so they asked centre if something could be provided.

CJI: Bihar said, State isn’t planning to run any community kitchens, Assam states it will go by centre’s decision, Andhra Pradesh is saying food grains are needed. So majority states are ready to implement provided you provide some suggestions etc

CJI: We are not on larger issues of malnutrition, etc Hunger is to be satisfied. Everyone is admitting there’s an issue, Have an humanitarian approach. Ask your officers to apply their mind.

CJI Ramana to AG: I think if you’re willing to give extra foodgrains, logistics is not an issue.

I don’t want to comment,there’s election time, Government is giving so many welfare schemes.

AG: This 2% additional food-grains I’ll put to the government, and formulate a scheme. Without any consultation with states. We are a developing country, there’s shortage of funds.

CJI: We are not saying anything on that, we know there’s no concrete data to say that.

Bench: We explained AG the intention of the court particularly of preparation of a model scheme & possibility of exploring resources & additional foodgrains. As far as logistics is concerned it’s rightly pointed by AG its for states to take care

Bench: We adjourn for 2 weeks, let states who want to file additional affidavit on malnutrition, etc can do that as early as possible. States at liberty to make suggestions

Counsel for Delhi Government submits that application has been filed in relation to cost imposed.

Bench: Cost part is deleted for all states.

CJI: You are not taking issue seriously is why we imposed the cost, we are waiving off the cost, but you must stick to schedule given.