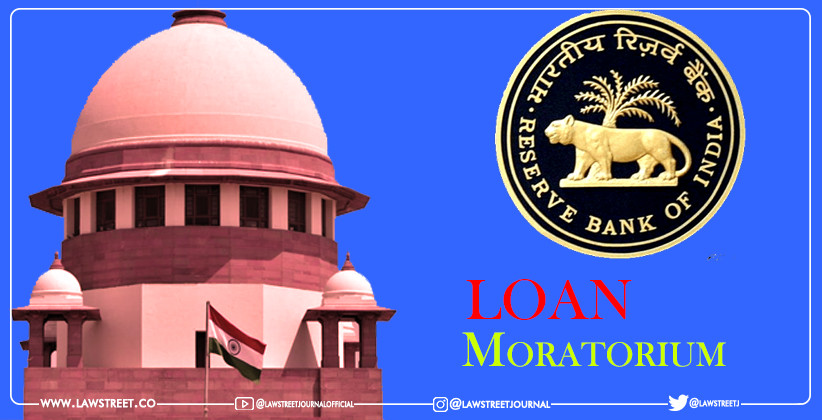 The categories in which the Centre and the RBI agreed to waive compound interest during the loan moratorium period are :

(vii) Personal loans to professionals up to Rs. 2 crore

Background of the matter:

The petitioners, which had initially sought extension of the moratorium up to December 31, again sought extension upto March 31, 2021, stating that the current situation demands and necessitates the same.

On November 19, the Centre had urged the Court to not intervene and provide further relief to borrowers under Article 32 as the Government was already "on top of it".

Court got to know through Solicitor General Tushar Mehta that many relief packages and schemes had been worked out with technical experts and the intervention of the Court in fiscal policy issues was uncalled for.

On November 28, 2020, a bench led by Justice Ashok Bhushan had directed the Centre to implement the decision taken by the Centre to forego interest for 8 specified categories up to Rs 2 crores.

Observations of the court:

The bench observed that there is no rationale in the Centre's policy to limit the benefit of waiver of compound interest only to certain loan categories less than Rs Two Crores.

Terming this policy of the Centre to be "arbitrary and discriminatory", the Court ruled:

The Court also observed that there is no justification shown to restrict the relief of not charging interest on interest with respect to the loans up to Rs. 2 crores only and that too restricted to the aforesaid categories.

In this regard, the Court observed that compound interest is in the nature of a “penal interest” as it is charegeable on deliberate/willful default by the borrower to pay the installments due and payable. Once the RBI has allowed the determent of installments, non-payment of the installment during the moratorium period cannot be said to be willful and therefore there is no justification to charge interest on interest/compound interest/penal interest for the period during the moratorium.

However, the the Court observed that it was not possible to order complete waiver of interest during the loan moratorium period, as the banks have to pay interest to depositors, pensioners etc.  Banks have to meet administrative expenses as well. There may be several welfare funds schemes,category specific and sector specific which might be surviving and are implemented on the strength of the interest generated from their deposits.

It is to be noted that petitioners’ prayed for extension of the 6 month loan moratorium period granted by the RBI on account of COVID-19 pandemic. The bench rejected the prayer.

(i) total waiver of interest during the moratorium period;

(ii)to extend the period of moratorium;

(iv)that there shall be sector wise reliefs provided by the RBI; and

(v)that the Central Government/RBImust provide for some further reliefs over and above the relief packages already offered stand dismissed.

The court further held that there is a limited scope of judicial review in economic policy matters.

Financial policy is a field in which courts should tread warily, as judges are not experts. In what manner financial packages and reliefs are to be provided is to be decided by the Central Government with the aid and advise of expert bodies like the Reserve Bank of India.

Courts cannot interfere even if a second view of the policy is possible. Legality of the policy and not the soundness of wisdom of policy is the subject of judicial review. Courts are not appellate forum or advisors with respect to executive policy matters.

The Court held that no writ of mandamus can be issued to direct the Central Government or the Reserve Bank of India to provide relief to particular sectors over and above the sectors already identified. It is not for the Court to decide what should be the nature of financial reliefs which should be granted.

The judgment authored by Justice MR Shah observed that the government also suffered due to unprecedented pandemic and lost GST revenue. The Government has its own financial concerns. Pandemic affected all sectors including the government. The Government might have their own priorities as it has to spend in various fields like health, medicine, providing food/shelter, arranging transportation to migrants etc.

It cannot be said that Centre has not taken steps in backdrop of COVID19, the bench observed, after mentioning some of the relief packages announced by the Union Government under 'Arma Nirbhar Bharat', 'Garib Kalyan' schemes.

The bench comprised of Justices Ashok Bhushan, R Subhash Reddy and MR Shah. The Court had reserved the Judgment on December 17 last year after hearing petitioners, Centre, RBI and intervenors.