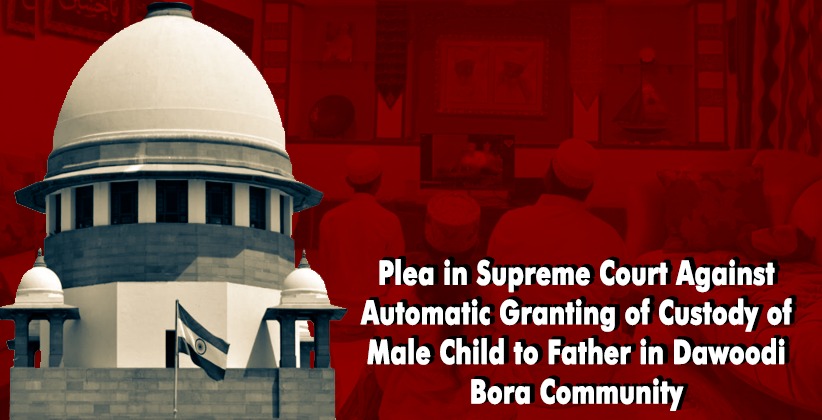 Judiciary Dec 17, 2020 Gautami Chakravarty ( Editor: Ekta Joshi ) 11 Shares
11 Shares
A writ petition has been filed before the Supreme Court challenging the constitutional validity of a custom followed by the Dawoodi Bora community among Muslims, according to which the custody of a male child above the age of 7 automatically goes to the father.

The petition has been filed by a Mumbai-resident, Fatema Quaid Zohar Challawala, stating that the said custom is violative of Article 14 and 15 of the Constitution inasmuch as it arbitrarily deprives a mother from the custody of her male child, without any due process of law. She has alleged that the impugned custom also violates the right of the children of the Dawoodi Bora community as it ignores the principal of «paramount welfare» of a child. At the same time, she has alleged, the custom goes contrary to the right of a mother to dispute the custody of her child.

She has urged that any custom is subject to Part III of the Constitution, i.e. Fundamental Rights, as per the Supreme Court's ruling in Shayara Bano v. Union of India, 2017 SCC 1, and hence, it is also subject to Article 14 and its species right of Article 15. If any custom or religious practice that is sought to be protected under Article 25 of the Constitution is in violation of Article 14 and 15, the same ought to be struck down as unconstitutional,the plea stated. She has submitted that the impugned custom is not an essential religious practice of Islam and has urged the Court to take a progressive view in relation to the personal laws of Muslims vis-à-vis Rights of their women. She has submitted that the impugned custom of giving custody of a child above the age of 7 to the father, without any process of law, encroaches upon the civil rights of women and should be declared as unconstitutional. In the facts of the case, the Petitioner has alleged that her husband is under an illicit relationship with another lady and he is not at all interested in the welfare of the child. But in spite of that, the child has been forcefully taken away from the legal custody of the Petitioner, notwithstanding that it was the Petitioner who took care of their son all these years. The petition is filed thorugh Advocates Sriram P. and Debopriyo Pal.