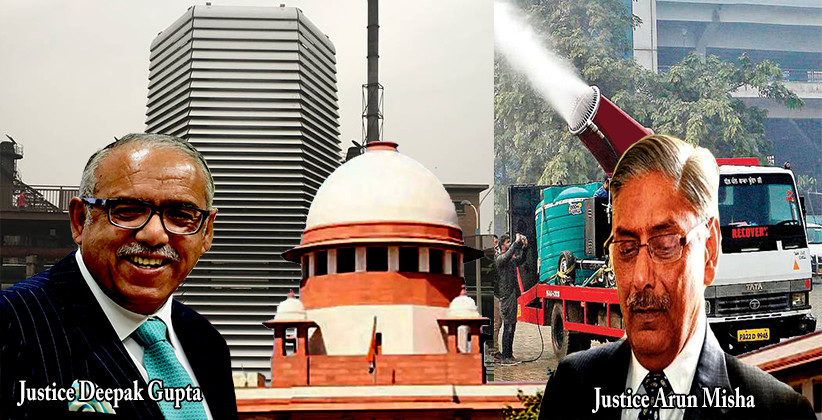 The Supreme Court on November 25, 2019, in the case of M.C. Mehta v. Union of India & Ors. called upon the Chief Secretaries of the States of Punjab, Haryana, UP and NCT of Delhi to answer for the rising levels of pollution and ineffectiveness on their part towards bringing it down despite various directions given by the Court previously. The Court asked why the Governments shouldn’t be held liable to compensate citizens who are living and breathing in cities that have become akin to gas chambers.

A Division Bench of Justices Arun Misha and Deepak Gupta took suo moto cognizance of the rising water pollution as well and called upon the Chief Secretaries to fulfil their constitutional duty and “do the needful for providing better air and potable water”. They advised the Government of Delhi and the Centre to push aside their differences, if any, and come up with a working plan within 10 days to install Smog Purifying Towers all around the city.

In this regard, the Court ruled that, “With respect to Smog Towers, let a concrete decision be taken within 10 days from today what kind of towers are required which may operate successfully and how many such towers are required so as to take care of the pollution which is being caused in Delhi and NCR region. The decision be taken not only by the Government of Delhi, but also by the States of Punjab, Haryana and Uttar Pradesh, where the position is reported to have deteriorated.”

The effectiveness of using “Anti-Smog Guns” that spray water upto 50 metres to bring down suspended pollutants in the air was questioned and the Government of Delhi along with the Central Pollution Control Board or CPCB has been asked to produce a report in the matter within 10 days.

In relation to this issue, the Court ruled that, “We require the Government of NCT of Delhi to report to us what steps they have taken in this regard to use and acquire these Anti Smog Guns and the outcome of the experiment which was performed. Let Central Pollution Control Board (CPCB) also ascertain and submit a report regarding the effect created by the use of such guns within 10 days.”

Since stubble-burning by farmers continued to remain a major concern in these states, the Court directed respective Governments to provide INR 100 per quintal to every small and marginal farmer to help dispose of residual stubble produced as a by-product of growing non-Basmati rice, in a sustainable manner.

The Court expressed dissatisfaction over unreasonable excuses offered by the Chief Secretaries placing all blame on farmers who needed a “behavioural change” to help decrease pollution. The Chief Secretary of Punjab proposed the idea of making bailers available to more farmers, which are machines used for collecting and removing stubble.

The Court banned all demolition and construction work in Delhi-NCR until the Air Quality Index or AQI comes down to safe level.  Moreover, the Court took cognizance of the fact that there are 6 other cities in the country whose AQI is worse than Delhi, 3 out of which are situated in UP alone; apart from expressing concern over untreated garbage still being spilled into rivers like Ganga and Yamuna. In this regard, the court observed that, “We see Yamuna river virtually turned into a sullage. Similar is the position with Ganges.”

Finally the Court ordered the setting up of a High Level Committee within 3 days of the Order comprising of IIT experts, stakeholders from the CPCB and the Government of Delhi to work out a plan within 3 weeks for the usage and feasibility of technologies like Oxy Furnaces (that reduce Ozone emissions from industries), wireless sensors, nanotechnology, laser methods, spectroscopic monitoring techniques and chemical methods towards controlling pollution.