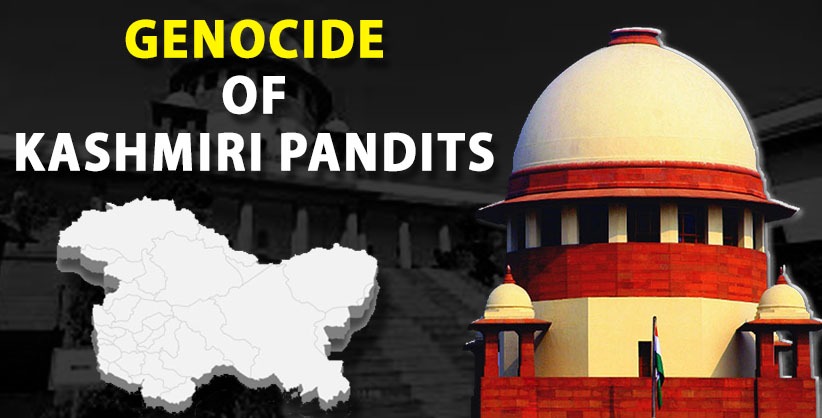 NEW DELHI: The Supreme Court has dismissed a curative petition, filed by 'Roots in Kashmir' for a probe either by the CBI or National Investigation Agency into the alleged mass-murders and genocide of Kashmiri Pandits during 1989-90.

A bench of Chief Justice D Y Chandrachud and Justices Sanjay Kishan Kaul and S Abdul Nazeer said, "We have gone through the Curative Petition and the connected documents. In our opinion, no case is made out within the parameters indicated in the decision of this Court in Rupa Ashok Hurra v Ashok Hurra (2002).

Curative petition is last legal recourse before the Supreme Court.

The order in the matter was passed by judges in their chamber on November 22, after going through the papers.

The review petition against the order rejecting the plea for probe was dismissed in 2017.

The NGO, in its plea, alleged that the police and other state machinery, at the relevant time, were so influenced by the leadership of the ruling political parties that no legal action was taken against the perpetrators and masterminds of ''the religious killings and exodus''.

"The dastardly genocide and exodus of Kashmiri Hindus and Sikhs which happened in 1989-90 in the Kashmir valley is a glaring example of complete failure of Constitutional Machinery in preventing the genocide and protecting the life, property of the Kashmiri Hindu and Sikh in the Kashmir valley. Therefore, the Fundamental Rights guaranteed under Article 14, 19 & 21 of the Constitution of India were openly violated," the petition stated.

The plea challenged an order of the top court passed in 2017 dismissing the plea saying, "the instances referred in the petition pertain to the year 1989-90, and more than 27 years have passed by since then. No fruitful purpose would emerge, as the evidence is unlikely to be available at this late juncture".

The curative petition has cited a 2018 Delhi High Court order on Sajjan Kumar in anti-Sikh riots case. The high court allowing the appeal said, "It is important to assure those countless victims waiting patiently that despite the challenges, truth will prevail and justice will be done."

The plea said: “Transfer of investigation of all the FIR’s/cases of murder and other allied crimes against Kashmiri Pandits in year 1989-90, 1997 and 1998, to some other independent investigating agency like CBI or NIA or any other agency as appointed by this court, as till date J&K police has failed miserably to make any progress in hundreds of FIR’s lying pending with them”.

The plea sought prosecution of Yasin Malik and Farooq Ahmed Daar @ Bitta Karate, Javed Nalka and others, for hundreds of FIRs of murders of Kashmiri Pandits during 1989- 90, 1997 and 1998, and which are lying un-investigated by J&K Police even after expiry of 26 years.

“Transfer of all the FIR’s/cases pertaining to murders of Kashmiri Pandits, from State of J&K to some other State (preferably State of NCT of Delhi), so that the witnesses, who were reluctant to approach police or Courts in view of their safety concerns, can freely and fearlessly come and depose before Investigating agencies and Courts”, added the plea.

The plea urged the top court to issue direction to complete the trial and prosecution of Yasin Malik for alleged gruesome murder of 4 officers of Indian Air Force on the morning of January 25, 1990, which is currently pending before CBI Court.