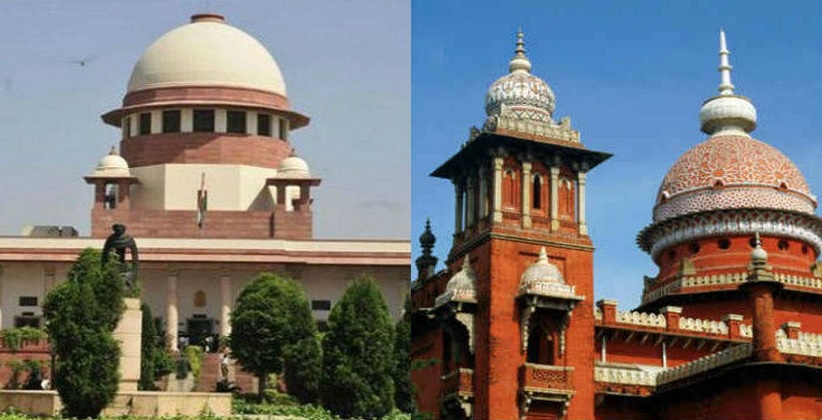 The Supreme Court on Friday (September 4, 2020), dismissed the plea of eight judicial officers of Tamil Nadu, seeking to be considered for appointment as a judge of Madras High Court. They also sought directions to return the list of names already recommended by the collegium of Madras High Court for the appointment of judges. The petitioners pleaded that despite being the senior-most in their cadre of District Judge, they are being overlook3d by the High Court and now their juniors have been elevated/ promoted to the Madras High Court as a judge.

The bench of the apex court was headed by Chief Justice of India SA Bobde and comprised of Justice AS Bopanna and Justice V Ramasubramanian. The petitioners were Madras High Court Registrar (vigilance) R. Poornima, Tamil Nadu State Legal Services Authority (TNSLSA) Member Secretary K. Rajashekhar and the Principle Judge of the Family Courts in Chennai A.K.A Rahmaan, Principle District Judges R. Sakthivel, A. Kanthakumar, A. Nazeem Banu, M.D. Sumathi and M. Suresh Viswanath. The basic argument revolved around Article 217 and also according to the petitioners they were being discriminated which were a violation of Article 14 of the Constitution of India.

The bench was of the opinion that the petitioners have not complete 10 years as the judicial officers hence the collegium was right in not promoting them to the position of High Court Judges as required by Article 217 (2) (a) of the Indian Constitution. The collegium recommended the names of the persons who fulfilled the criteria. Article 217 clause (1) merely prescribes the method of appointment and the age up to which an appointee can hold office.

The apex court in its judgment said that “In simple terms, the Petitioners want the experience gained by them as advocates to be clubbed together with the service rendered by them as Judicial Officers, for determining their eligibility. Once this clubbing is allowed the petitioners would like to take advantage of their settled seniority position in the cadre of District Judge, over and above that of Respondents Nos. 5 to 23. In other words, the petitioner wants the best of both the words”.

On Article 217 the court said that the Article provides for the mode of recruitment and the qualifications and further explained, “Suppose there was no “Explanation” under clause (2) of Article 217 then there would have been no scope for any argument, other than to accept blindly, that the qualifications stipulated in clause (2) of Article 217, can be acquired by an individual by separate two sources, namely (i) from the Bar or (ii) from ‘judicial services’, as defined in clause (b) of Article 236. This is for the reason that Sub-clauses (a) and (b) are actually in the alternative, as can be seen from the use of the word “or” in-between”. The bench also rejected the argument that it will be discriminatory to allow the benefit of clubbing only to a person who held a judicial office and later became an advocate. The court concluded that the petition was “wholly untenable” and misconceived and hence was dismissed.